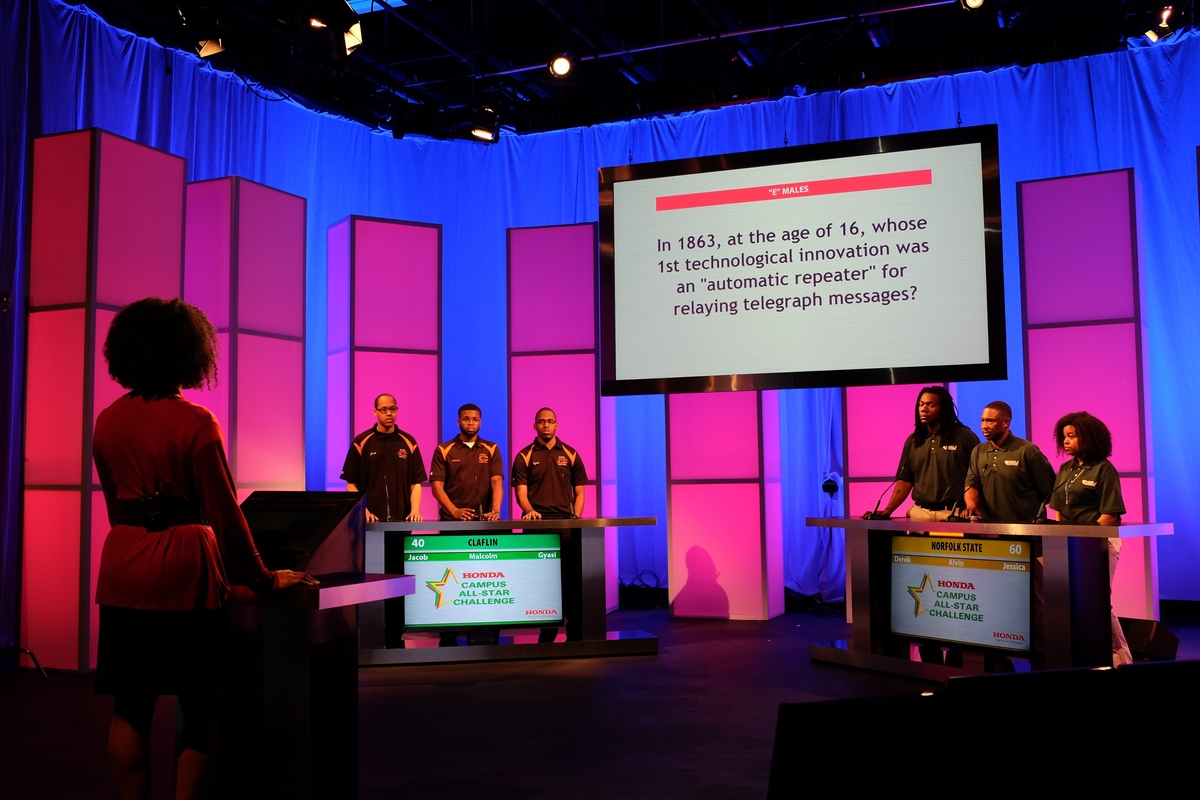 After months of rigorous preparation and multiple competitions among 89 schools, students from 48 Historically Black College and University (HBCU) teams are ready to compete for the National Championship of the 28th Annual Honda Campus All-Star Challenge (HCASC), April 8-10, 2017. The "Great 48" will vie for top honors and bragging rights, as well as a share of more than $350,000 in institutional grants from Honda. The HCASC National Championship Finals will be held on April 10 at 12 p.m. EDT on the Honda campus in Torrance, Calif. Tune into HCASC.com for all of the academic action, including a live stream of the Final Four competition.
Honda established the Honda Campus All-Star Challenge as a way to highlight and recognize the academic talents of HBCU students. More than $8 million in grants from Honda have provided support for books and tuition, scholarships, enhancement of student programs and other investments to improve campus facilities. The winning HBCU team will receive a $75,000 institutional grant; the runner up will receive $30,000, while the third and fourth place finishers will each take home $20,000.
This year's journey to the championship began in the fall, with 89 HBCUs competing for a spot in the finals. Team members spent countless hours preparing for the competition, which includes knowledge acquisition, learning game skills and mastering game strategies. The Honda Campus All-Star Challenge tests students' knowledge and ability to quickly and accurately answer questions about world history, science, literature, religion, the arts and popular culture. See the full list of participating HBCUs.
"The Honda Campus All-Star Challenge is more than a competition of academic excellence; it has fostered a close-knit community that supports the students even after they enter professional life," said Steve Morikawa, Vice President, Corporate Relations and Social Responsibility, American Honda Motor Co., Inc. "The 'Great 48' teams represent some of the best and brightest HBCU talent, and Honda looks forward to an exciting HCASC National Championship Tournament."
Building a Legacy through HCASC
With more than 125,000 HCASC alumni, the annual academic competition creates professional networking opportunities for HBCU students. HCASC's impressive roster of past participants includes engineers, lawyers, doctors and professors. Each year, outstanding former HCASC competitors, who have succeeded in their chosen career and life paths, are inducted into the HCASC Alumni Hall of Fame. To continue their legacy, many Hall of Fame alumni become mentors for the current generation of HCASC competitors.
"HCASC helped me meet 'friends for life' who now form the core of my social and professional networks," said HCASC Alumni Hall of Fame honoree, Myles B. Caggins, who serves as U.S. Army Lt. Colonel and Defense Department Spokesman for Military Personnel Policy. "Two decades after my last 'hands on the buzzer' experience as an HCASC player at Hampton University, I stay engaged with HCASC because my fellow volunteers are the heart of a positive experience for our exceptional students."
The 2017 Honda Campus All-Star Challenge National Championship Finals will be live-streamed at HCASC.com on April 10 at 12:00 p.m. EDT. For social media updates, visit the HCASC Facebook, Twitter and Instagram pages and follow #HCASC.

About Honda's Commitment to Historically Black Colleges and Universities
Honda has supported and celebrated America's HBCUs for more than 25 years. Since 1989, Honda Campus All-Star Challenge (HCASC), one of Honda's largest and longest running philanthropic initiatives in the United States, has impacted the lives of over 125,000 academic superstars from across the country. Since 2003, Honda Battle of the Bands (HBOB) has provided eight top HBCU marching bands with a once-in-a-lifetime opportunity to deliver a dynamic performance on a national stage, while earning grants and positive attention for their respective institutions. Through programs like HCASC and HBOB, Honda is not only helping students academically, but building them up for the future, helping position them for career success. Honda has also awarded $10 million to support music and educational programs at America's HBCUs.