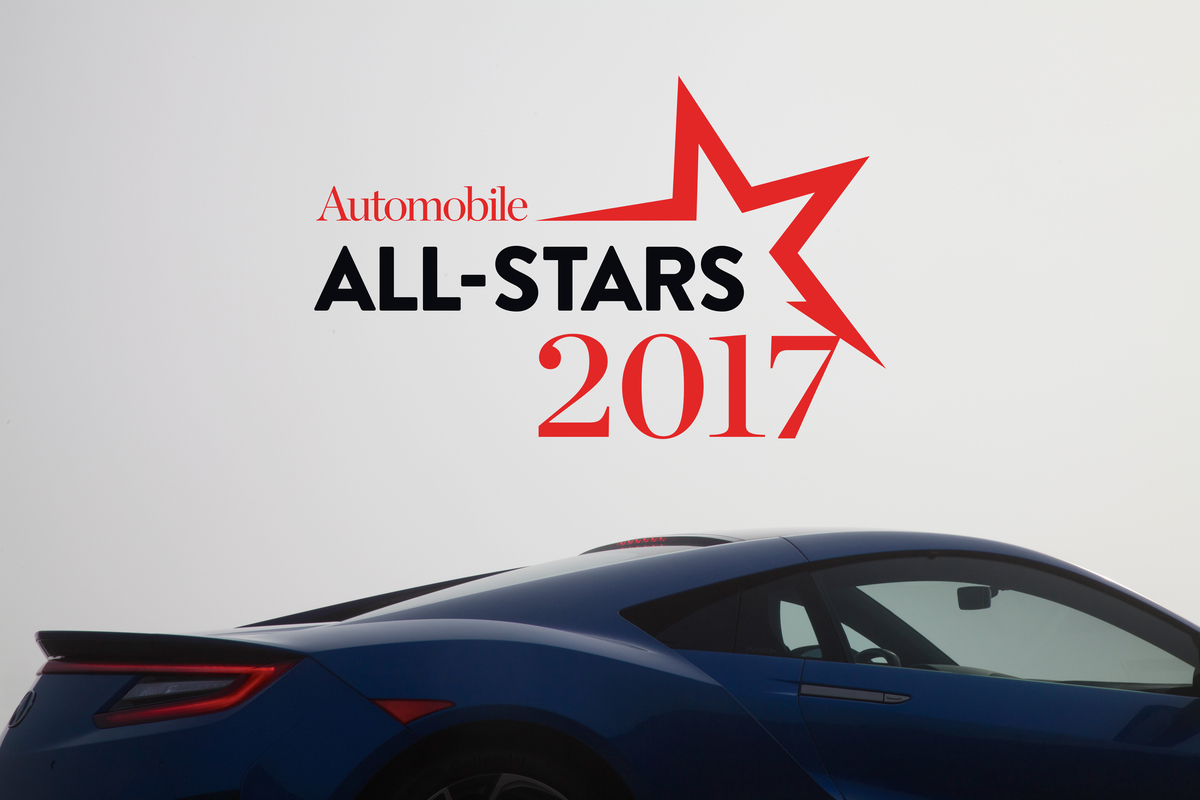 The 2017 Acura NSX was selected as a 2017 AUTOMOBILE All-Star (Acura.us/NSXAutomobileAllStar), adding to the supercar's growing list of accolades and recognition since its spring 2016 launch. AUTOMOBILE today partnered with the Amelia Island Concours d'Elegance to announce the 2017 All-Stars during a live stream on the AUTOMOBILE Facebook channel. The Acura NSX, America's only U.S-built supercar1, was selected from a diverse field of 23 contenders to join a select group of six vehicles heralded for their exceptional characteristics including driving dynamics, styling and refinement, and technological advancement.
According to the editors and staff at AUTOMOBILE, the Acura NSX earned its All-Star status the old-fash­ioned way: "by consistently putting a grin on drivers' faces." With its three-motor, 573-horsepower2, twin-turbocharged Sport Hybrid Super Handling All-Wheel Drive (SH-AWD) powertrain, the Acura NSX challenged some of the most exotic supercars including past All-Star winners. The NSX impressed the editors with its electrifying driving performance and precision in testing on the roads of Deer Creek Road near Mount Charleston, Nevada.
"Yes, the Acura NSX is a tour de force of advanced engineering, but it's far from cold and impersonal," said Automobile Editor-in-Chief Mike Floyd. "Instead, the NSX is a supercar that makes you feel like a hero regardless of skill level at the track, and it's eminently accessible and easy to drive off of it. A true All-Star."
AUTOMOBILE All-Stars are chosen from a vehicle contender list made up of all-new, heavily revised, or newly significant variants on sale or otherwise available in the U.S. in the 12 months preceding its test. The editorial staff spends multiple days driving the assembled array of All-Stars contenders on both road and track and casts their votes for the winners by private ballot. After choosing the All-Stars winners, the number of which varies from year-to-year, the staff then spends extensive seat time with the contenders through long-term tests and other epic, feature-based drives.
"We're extremely proud to have the pinnacle Acura vehicle, the NSX, recognized with one of the industry's pinnacle honors, the Automobile All-Star award," said Jon Ikeda, vice president & general manager of Acura. "With NSX, we set out to deliver a unique expression of Acura performance, and this honor further validates that Acura is a performance brand."
Launched last spring, the 2017 Acura NSX is the only supercar designed, developed and manufactured in the U.S., and is produced exclusively at the Performance Manufacturing Center in Marysville, Ohio.
The Acura NSX was evaluated against 22 other cars including: Aston Martin DB11, Audi A4, Bentley Bentayga, BMW M2, Cadillac CT6, Cadillac XT5, Chevrolet Bolt, Chrysler Pacifica, Ford Focus RS, Genesis G90, Honda Civic, Infiniti Q60, Jaguar F-Pace, Jaguar XE, Lincoln Continental, Maserati Levante, Mazda CX-9, Mercedes-Benz E-Class, Nissan GT-R, Porsche 718 Cayman S, Toyota Prius Prime and Volvo S90. For more information, please visit automobilemag.com/awards.
About AUTOMOBILE
AUTOMOBILE, a brand of TEN: The Enthusiast Network, is America's leading automotive lifestyle brand, with a total audience of more than 5.7 million across its print, online, and social channels. AUTOMOBILE is home to the annual All-Stars awards and is written for the sophisticated enthusiast. For three decades, AUTOMOBILE has set the standard for automotive journalism, maintains a devotion to offbeat adventures, and continues to emphasize #noboringcars.
About Acura
Acura is a leading automotive luxury nameplate that delivers Precision Crafted Performance, an original approach to technology and design that creates a new driving experience. Last year, Acura celebrated the 30th anniversary of its launch as the first luxury nameplate from a Japanese automaker.
The Acura lineup features six distinctive models – the RLX premium, luxury sedan, the TLX performance luxury sedan, the ILX sport sedan, the 5-passenger RDX luxury crossover SUV, and the seven-passenger Acura MDX, America's all-time best-selling three-row luxury SUV. Last spring, Acura launched its next-generation, electrified NSX supercar as a new and pinnacle expression of Acura Precision Crafted Performance.
For More Information
Consumer information is available at www.acura.com. To join the Acura community on Facebook, visit facebook.com/Acura. Additional media information including pricing, features and high-resolution photography is available at acuranews.com/channels/acura-automobiles