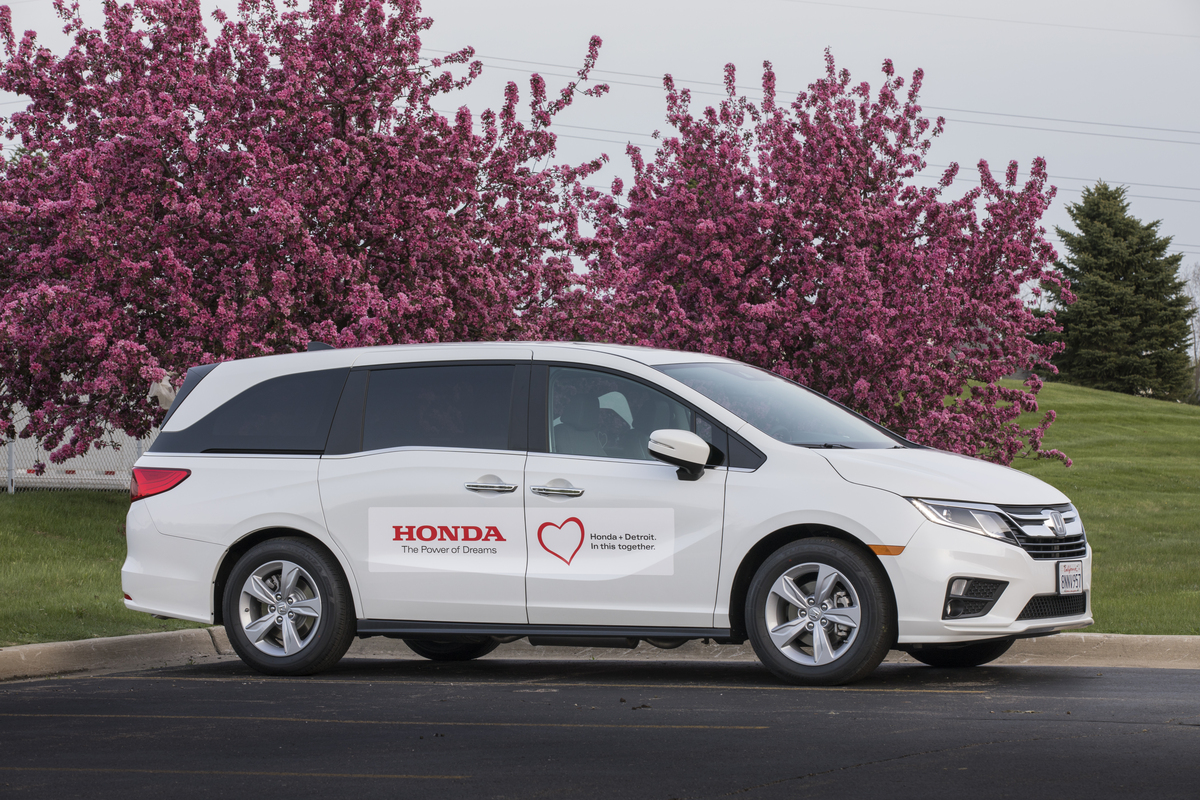 Honda today delivered 10 Odyssey minivans to the City of Detroit that have been specially outfitted to transport people potentially infected with COVID-19, as well as healthcare workers.  To protect the health of the driver from the potential for droplet infection during transportation, the Honda Odysseys have been retrofitted with a plastic barrier installed behind the front seating area, as well as modifications to the ventilation system to maintain an air pressure differential between the front and rear seating areas.
After seeing news reports about similar specially equipped vehicles modified by Honda in Japan, officials from the state of Michigan and the City of Detroit approached Honda in the U.S. in mid-April about the possibility of acquiring similar vehicles for use in transporting local residents and healthcare workers to COVID-19 testing.  A team of volunteers at Honda's R&D center in Raymond, Ohio, including senior engineers and fabrication experts, quickly conceived and designed a method to modify the U.S. Odyssey at the Honda R&D Americas vehicle development center in Raymond, Ohio, where it was originally developed.
"As of today, the City of Detroit has tested over 20,000 residents and employees for COVID-19. Transportation is a critical component of ensuring every Detroiter has access to a test. We are very appreciative of Honda for choosing Detroit to deploy these newly modified vehicles," said Mayor Mike Duggan, City of Detroit.
The team of Honda engineers and experts in Ohio took the project from initial concept to completion in less than two weeks.  All material fabrication and installation, and adjustments to the software for the Odyssey's ventilation system, was done entirely in-house.
"We're very proud of the efforts made by Honda engineers in Ohio to quickly devise a plan and modify a small fleet of Honda Odyssey minivans to support the people of Detroit in the face of this unprecedented global pandemic," said Rick Schostek, executive vice president of American Honda Motor Co., Inc. "This project is one of many initiatives being undertaken by Honda and our associates to support communities throughout the country during this very difficult time."
The Odyssey minivan modified in Japan is a smaller vehicle than the eight-seat U.S. version of the Honda Odyssey that was designed, developed and engineered in the U.S. and is made exclusively at a Honda plant in Lincoln, Alabama.
"Several members of our team have family members or friends working in the medical field to battle COVID-19 or know people who have family members battling COVID-19 infection and this became a very personal challenge to help potential victims and their families," said Mike Wiseman, senior director for Strategic and Materials Research of Honda R&D Americas, LLC, who led the project.  "At Honda, we believe the purpose of technology is to help people and make their lives better and we were humbled to make this commitment to potentially help save lives."
Odyssey Modification Process:
Honda engineers in Ohio installed a sealed clear polycarbonate (plastic) panel between the front seat compartment and rear two-row seating area by removing the hand grips on the structural roof pillar (B-pillar), behind the first row, replacing it with new brackets to attach the clear panel.  A second attachment bracket was fabricated and attached to the lower front seat belt anchor point for a total of three secure attachments on each side.
In conjunction with the installation of the clear polycarbonate barrier, the Odyssey's ventilation system software was tuned to maintain a more positive pressure zone within the front compartment to establish a designed air pressure differential between the front and rear seating areas, greatly reducing the potential for droplet infection migration during transportation.
Honda R&D engineers in Ohio designed the software that controls the ventilation system on the current-generation Odyssey. This core knowledge enabled engineers to tune the software to assure the air pressure differential is compliant with guidelines established by the Centers for Disease Control and Prevention (CDC) for negative pressure rooms in medical and research facilities.  Specifically, the software is tuned to run the blower motor powering the fans in the front seating area faster than the fans for the rear seating area. The resulting air pressure differential creates a more negative pressure chamber in the rear seating area, with rear compartment air exhausted out the vents in the rear of the vehicle.
Comments from State of Michigan Officials:
"When we developed our transportation service to the COVID-19 testing sites, we quickly realized that a lack of separation between the driver and passenger would be a limiting factor in our capacity to transport patients. This innovation from the Honda team will be critical to transporting passengers during this time," said Mark de la Vergne, Chief of Mobility Innovation for the City of Detroit.
"Honda's speed in addressing this challenge, paired with Detroit's willingness to find and detail a use case for Honda, made this a model public-private partnership. The state's goal is to conduct 15,000 tests a day. This kind of ingenuity will help us get there faster," said Trevor Pawl, Senior Vice President at the Michigan Economic Development Corporation, and head of PlanetM, the state's mobility initiative.
"As the conveners of the Detroit Mobility Coalition in partnership with the City for the past several years, MICHauto is committed to facilitating connections such as this to benefit our communities. This partnership with Honda in a time of crisis, is an ideal example of the importance of our mobility ecosystem to connect our local and state leadership and automotive and mobility industry together. MICHauto is pleased to play a role in helping to facilitate this information and technology transfer," said Glenn Stevens, Executive Director, MICHauto and Vice President, Automotive and Mobility Initiatives, Detroit Regional Chamber.
Honda Response to COVID-19:
Honda has undertaken several initiatives to harness the spirit of community in responding to the impact of the COVID-19 pandemic:

About Honda in North America
Honda established operations in America in 1959 and today employs more than 40,000 associates in the development, manufacturing, and sales of Honda and Acura automobiles, Honda power equipment, Honda powersports products, the HondaJet advanced light jet and GE Honda HF120 turbofan engines.
Based on its longstanding commitment to "build products close to the customer," Honda operates 19 major manufacturing facilities in North America, working with more than 600 suppliers in the region to produce a diverse range of products for customers locally and globally. In 2019, more than 90 percent of the Honda and Acura automobiles sold in the U.S. were produced in North America, using domestic and globally sourced parts.
Honda also operates 14 major research and development centers in the U.S. with the capacity to fully design, develop and engineer many of the products Honda produces in North America.
Honda R&D Americas employs more than 2,000 associates in the U.S. in the research, design, development and engineering of a variety of products including cars and trucks, ATVs and side-by-side vehicles and power equipment products. About 1,500 engineers and other staff are employed at the R&D center in Raymond, Ohio, located about 40 miles west of Columbus.