Senior pitcher Rachel Garcia (Palmdale, Calif.) of the UCLA softball team was named the Collegiate Woman Athlete of the Year and presented with the... 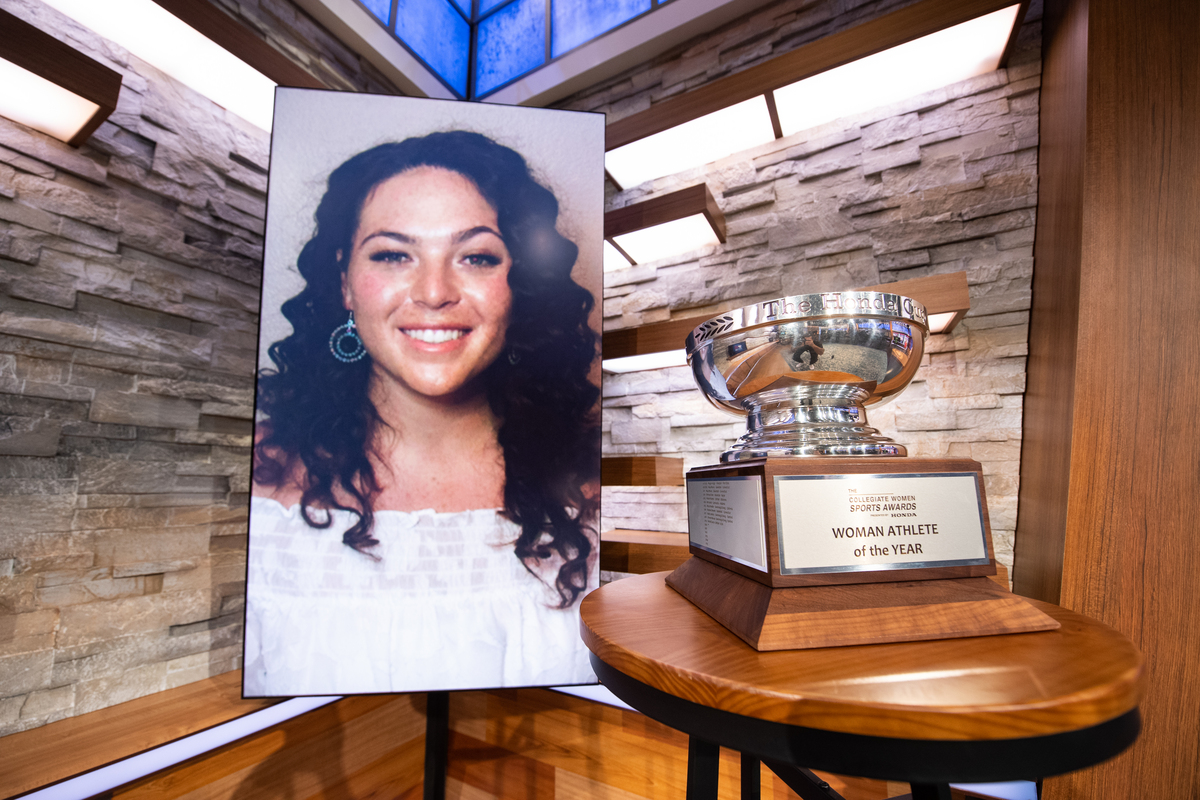 Senior pitcher Rachel Garcia (Palmdale, Calif.) of the UCLA softball team was named the Collegiate Woman Athlete of the Year and presented with the prestigious Honda Cup during the 45th anniversary broadcast of the Collegiate Women Sports Awards (CWSA) show presented by Honda on CBS Sports Network, at the CBS Studios in New York, NY. Honda has served as the program’s presenting sponsor for 35 years.

Garcia is a two-time Honda Cup winner after garnering the honor for the Class of 2019 and it is the first time in CWSA history that a winner has won back-to-back honors outright. Maya Moore (Basketball, Connecticut, 2011, 2010-tie) and Tracy Caulkins (Florida, Swimming & Diving, 1982, 1984-tie) are also two-time winners having each shared the award at least once.

“Together with The Collegiate Women Sports Awards, we celebrate the outstanding achievements of the Class of 2021 and congratulate this year’s Honda Cup winner, Rachel Garcia,” said Yvette Hunsicker, Vice President, Corporate Social Responsibility and the Office of Inclusion and Diversity, American Honda Motor Co., Inc. “Recognizing the disparities affecting women student-athletes, Honda is proud to support The CWSA in its mission to elevate women’s collegiate athletics on a national level.”

Garcia is a two-time Honda Sport Award winner for Softball and a three-time Honda Award finalist. She was named the 2021 Senior CLASS Award winner for Softball and the Pac-12 Player of the Year for the third time in a row and most recently was named the 2021 Schutt Sports/NFCA Division I National Player for the third time in her career. She is a four-time NFCA first-team All-American and All-Pac-12 first-team honoree and will be a 2021 Olympian with Team USA.

"We are proud to recognize the very talented Class of 2021 and the outstanding Honda Top Three in this unprecedented year,” said Chris Voelz, Executive Director of the Collegiate Women Sports Awards. “Rachel exemplifies so much that is good about college sports - a love for the game; dedication and discipline; aspiration and inspiration along with an incredible talent and competitive spirit laced with humility. Congratulations to her and her family as well as her Bruin family of teammates, coaches and administrators.”

For 45 years, the CWSA has honored the nation’s top NCAA women athletes for their superior athletic skills, leadership, academic excellence and eagerness to participate in community service.  Since commencing its partnership in 1986, Honda has provided more than $3.6 million in institutional grants to the universities of the award winners and nominees to support women’s athletics programs.

About Honda Corporate Social Responsibility
For more than 60 years in the U.S., Honda has been committed to making positive contributions to the communities where its associates live and work. Honda’s mission is to create products and services that improve the lives of people while conducting its business in a sustainable manner and fostering a diverse and inclusive workplace. Accordingly, Honda believes in helping people reach their life’s potential through its focus on helping children heal, inspiring underrepresented students, preserving the environment for future generations, creating safety for everyone, and strengthening our communities. Learn more at http://csr.honda.com/.