Associates at Honda of America Mfg., Inc. (HAM) today celebrated the start of mass production of the all-new 2018 Honda Accord with an announcement... 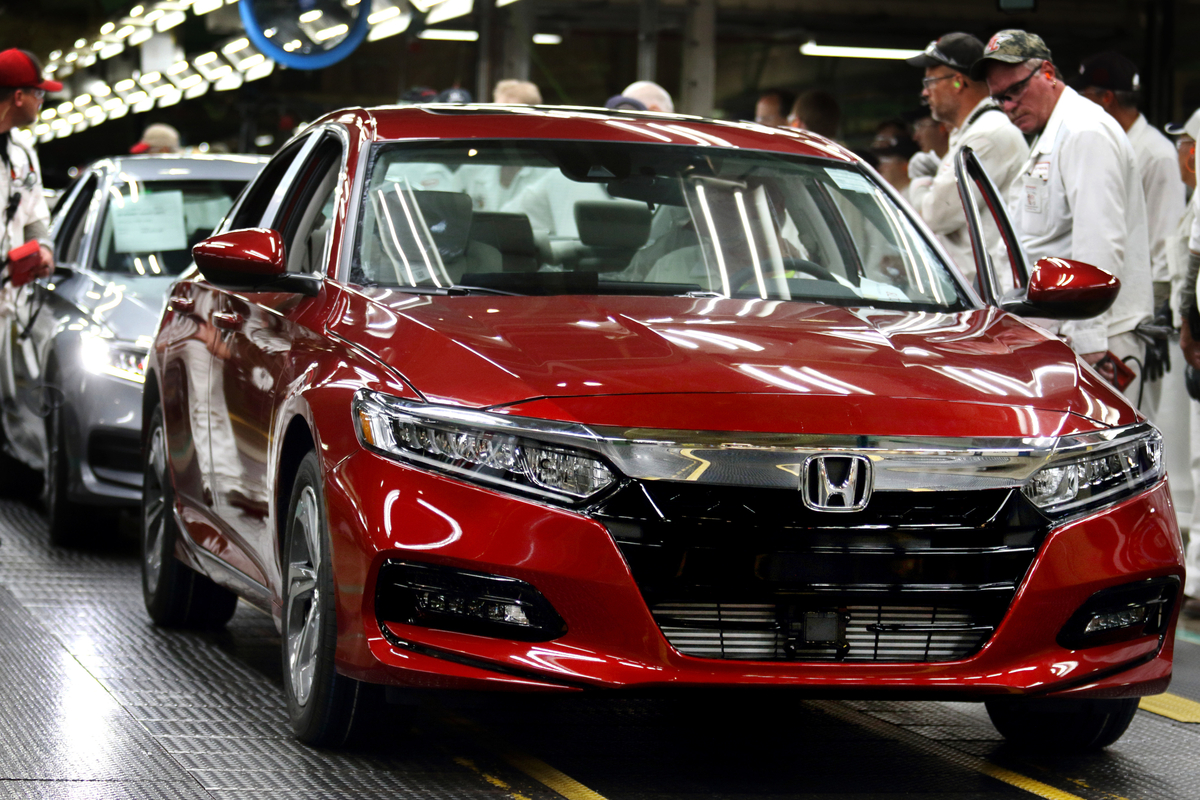 Associates at Honda of America Mfg., Inc. (HAM) today celebrated the start of mass production of the all-new 2018 Honda Accord with an announcement of new investments and jobs to support manufacturing of the 10th generation Accord, America's best-selling car of the past 41 years.
Honda invested $267 million and is adding 300 new jobs to support production of the all-new Honda Accord and to increase production at the Marysville Auto Plant (MAP). The investment total includes $220 million at MAP for new technologies and processes, including a new $165 million weld department featuring 342 state-of-the-art welding robots and $47 million at Honda's nearby Anna, Ohio engine plant for production of the 2018 Accord's 1.5-liter and 2.0-liter turbocharged engines, the first application of turbo power to the Accord lineup.
Additional new technologies applied to the manufacture of the new Accord at MAP include a laser brazing process for the Accord's roof and new stamping techniques to produce its more sharply sculpted body. In addition, Honda debuts Accord's first-ever use of high-performance structural adhesives for improved body rigidity, and the application of acoustic spray foam to the body for enhanced cabin quietness. Moreover, MAP has added a new sub-assembly process for the Intelligent Power Unit (IPU) that will help power the new Accord Hybrid, which will return to production in Ohio.
"The new jobs and production growth will enable us to meet anticipated strong demand for the new Honda Accord," said Rob May, MAP plant manager. "Re-imagining the new Accord and bringing it to life took an incredible effort by our project team and our associates. The privilege of producing America's best-selling car for the last 41 years is a significant point of pride for our associates."
Accord, the first vehicle from a Japanese automaker to be made in America, has been in continuous production at the Marysville Auto Plant (MAP) since November 1982 - with cumulative U.S. production exceeding 11 million units over 35 years.
The 2018 Accord is new from the ground up and features a lighter and more rigid body structure, an advanced new chassis design, two all-new, high-torque direct-injected and turbocharged engines, the world's first 10-speed automatic transmission for a front-drive car, and with a host of new safety, driver-assistive and connected-car technologies – all wrapped in a more sophisticated, sleek and athletic design with top-class interior space and comfort.
The all-new, Honda-designed 10-speed automatic transmission (10AT), the first of its kind for a front-wheel-drive car, will be produced at Honda Precision Parts of Georgia transmission plant in Tallapoosa, Georgia. Honda recently announced a combined $149 million investment in the Russells Point, Ohio, and Tallapoosa plants to facilitate production of the new 10AT.
For 2018, all Accords will feature the full suite of Honda Sensing® safety and driver- assistive technologies as standard equipment. Honda Sensing includes Collision Mitigation Braking System™ (CMBS™), Lane Departure Warning, Road Departure Mitigation, Adaptive Cruise Control with Low-Speed Follow and new Traffic Sign Recognition. All Accords also have a Multi-Angle Rearview Camera with dynamic guidelines.
The Accord targets top U.S. government (NCAP) and IIHS collision safety ratings. Standard advanced active and passive safety systems include Vehicle Stability Assist with Traction Control, Anti-lock brakes with Electronic Brake Distribution, Tire Pressure Monitoring System (TPMS), advanced front airbags, driver and front-passenger side airbags and new driver and front-passenger knee airbags.
The all-new, even more refined and fuel-efficient Accord Hybrid will be powered by the third generation of Honda's innovative two-motor hybrid technology, offering improved power delivery with no compromise to interior or cargo space and packaging.
The 1.5-liter powered Accord will be available in five trims – LX, Sport, EX, EX-L and Touring (new for 2018). The 2.0-liter model, with the highest torque output ever for Accord, has three trims – Sport (new for 2018), EX-L, and Touring. And the new Accord Hybrid will be available in four trims – Hybrid, EX, EX-L and Touring. Sport trims for both 1.5-liter and 2.0-liter engine variants will now feature an available short-throw 6- speed manual transmission. The 2018 Accord is built using domestically and globally sourced parts.
About Honda
Honda has been producing automobiles in America for 35 years and currently operates 19 major manufacturing facilities in North America, including nine auto plants. Honda currently has the capacity to produce 1.92 million vehicles in North America and, in 2016, more than 95% of all Honda and Acura vehicles sold in the U.S. were made in North America, using domestic and globally sourced parts. In 2016, more than 68 percent of all Honda and Acura automobiles sold in the U.S. were made in America, more than any other major automaker except one.