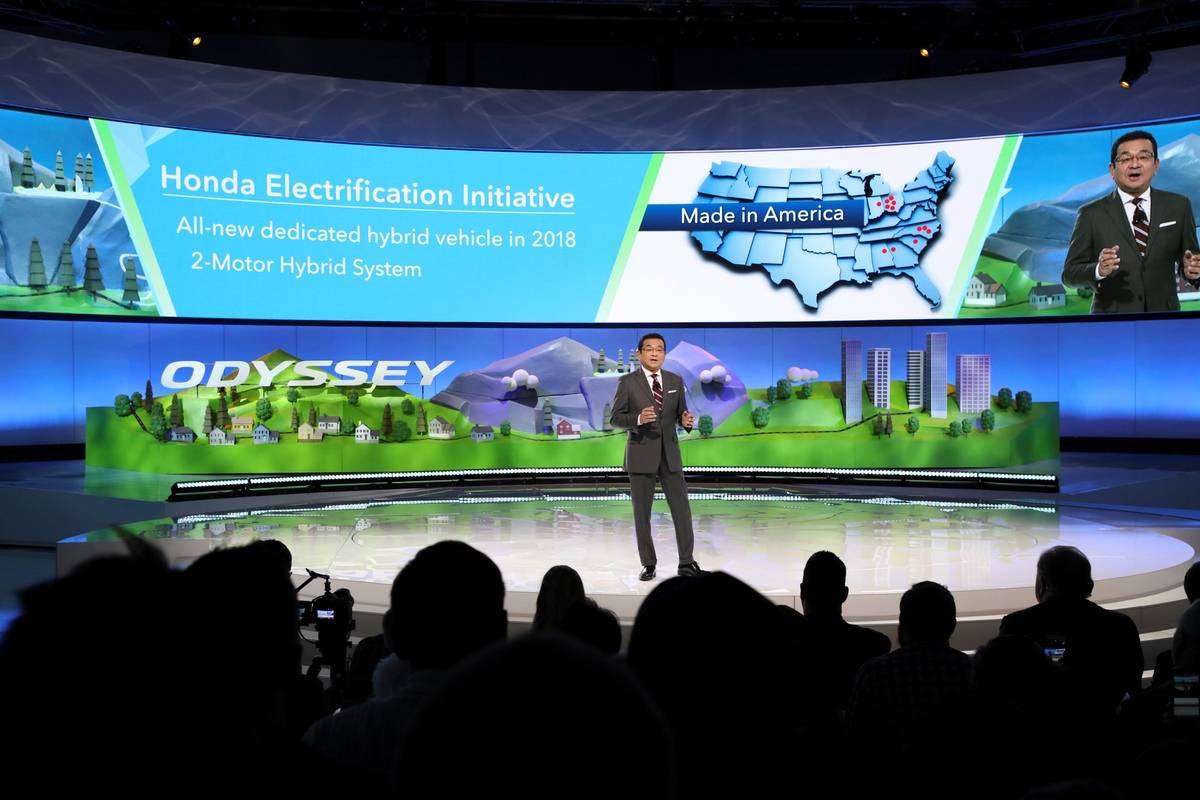 Honda today announced a new dedicated hybrid model that will be made in America and launch nationwide in 2018, as part of the Honda Electrification Initiative, which will expand the company's portfolio of electrified vehicles. Honda also announced it will expand the use of its innovative two-motor hybrid powertrain from passenger cars to its light truck lineup in the future.
"Half of the all-new models Honda will launch in the United States in the coming two years will be electrified vehicles," said Takahiro Hachigo, President & CEO of Honda Motor Co., Ltd. "In the long term, electrified vehicles are key to the future of carbon-free mobility."
Honda set a global target for two-thirds of all sales to come from electrified models by 2030 and to halve its total company CO2 emissions from 2000 levels by 2050.
The new, dedicated hybrid vehicle will utilize Honda's innovative two-motor hybrid system, which is currently deployed in the 49 mpg Accord Hybrid, the most fuel efficient midsize sedan in America. The new model will be produced at an existing plant in the United States. Additional details on the vehicle and its manufacturing will be announced closer to launch.
In December 2016, Honda began the launch of its new Clarity series of electrified vehicles, starting with the Clarity Fuel Cell. The Clarity Fuel Cell is available through select California Honda dealers and boasts the highest range of any zero-emissions vehicle in America with its 366-mile EPA range rating.1 This year, Honda will launch the Clarity Electric and the Clarity Plug-In Hybrid, as the two remaining models in its Clarity series of premium midsize electrified vehicles.
About Honda
Honda offers a full line of reliable, fuel-efficient and fun-to-drive vehicles with advanced safety technologies sold through approximately 1,000 independent U.S. Honda dealers. The Honda lineup includes the Fit, Civic, Accord and Clarity Fuel Cell passenger cars, along with the HR-V, CR-V and Pilot sport/utility vehicles, the Ridgeline pickup and the Odyssey minivan.
Honda has been producing automobiles in America for 34 years and currently operates 19 major manufacturing facilities in North America. In 2016, about 96 percent of all Honda vehicles sold in the U.S. were made in North America, using domestic and globally sourced parts.

1 366-mile driving range rating. Based on 2017 EPA ratings. Use for comparison purposes only. Your MPGe and driving range will vary based on how you drive and maintain your vehicle, driving conditions, powertrain condition, and other factors.