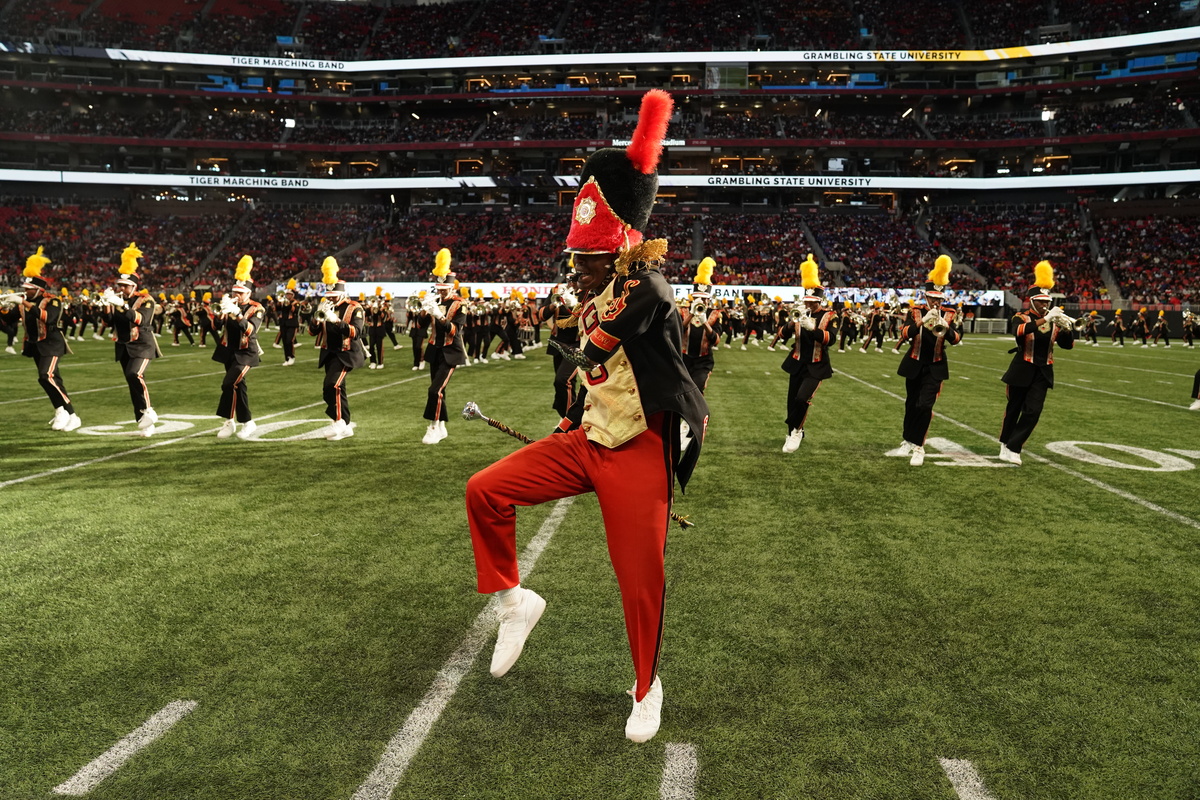 Honda Battle of the Bands (HBOB) marked its return to Atlanta on Saturday, January 25, with dazzling performances by eight of the nation’s top Historically Black Colleges and Universities (HBCUs) marching bands and a special set by R&B singer-songwriter Tank. A crowd of more than 58,000 HBCU fans, students and alumni were on hand to witness the celebration of HBCU culture, musical talent and pageantry.
The 17th anniversary HBOB theme, “Be the Dream,” highlighted the power that dreams have to inspire a brighter future. The show opened with a soulful performance by all eight bands, as more than 2,400 musicians and dancers joined together on the field. Additional highlights included Florida A&M’s tribute to Atlanta, Tennessee State University reminding fans to vote, and welcoming the first female band director to conduct at HBOB, Dr. Nikole Roebuck of Grambling State University.
This year’s Honda Battle of the Bands Invitational Showcase participants included:

Honda awarded $200,000 in grants to this year’s participating bands to help support their music education programs, and covered the bands’ travel and accommodation expenses for the event.
Recruitment Fair Encourages High School Students to Think about College
In addition to the marching band performances, Honda hosted an HBCU College Fair to connect high school students with representatives from over 50 HBCUs. Designed to go beyond just exposing young people to the opportunities offered by the institutions, the college fair enabled prospective students to meet with admissions recruiters and marching band representatives to discuss admissions requirements and scholarship opportunities. This year’s college fair hosted 6,500 attendees.
Honda’s Three-Decade Commitment to HBCUs
Honda has been committed to supporting the success and dreams of the nation's HBCUs for 30 years. Through initiatives like Honda Battle of the Bands and Honda Campus All-Star Challenge, as well as financial support from the American Honda Foundation, Honda has been able to impact the lives of nearly 200,000 students and award over $12 million in grants in support of HBCU education programs and facilities improvements.
For more information on HBOB, visit www.hondabattleofthebands.com. Fans can also check out HBOB’s 17th anniversary journey with highlights from the Invitational Showcase on the official HBOB social media channels:

Honda now ramps up for Honda Campus All-Star Challenge (HCASC), a unique academic tournament for HBCU students that showcases and recognizes their academic talents. The 2020 National Championship Tournament will be held March 28-April 2, 2020. Visit www.hcasc.com for more details.
About Honda Corporate Social Responsibility
For more than 60 years in the U.S., Honda has been committed to conducting its business in a sustainable manner and fostering a diverse and inclusive workplace. In addition, Honda strives to strengthen our communities in many ways, by giving back to society and the communities where its associates work and live. Accordingly, Honda believes in helping people reach their life’s potential through its focus on improving children’s health, inspiring underrepresented students and preserving the environment for future generations. Learn more at http://csr.honda.com/.