Honda Builds its 25 Millionth Automobile in the U.S.

Feb 28, 2018 – MARYSVILLE, Ohio Honda today built its 25 millionth automobile in the United States, a 2018 Accord produced at the Marysville Auto... 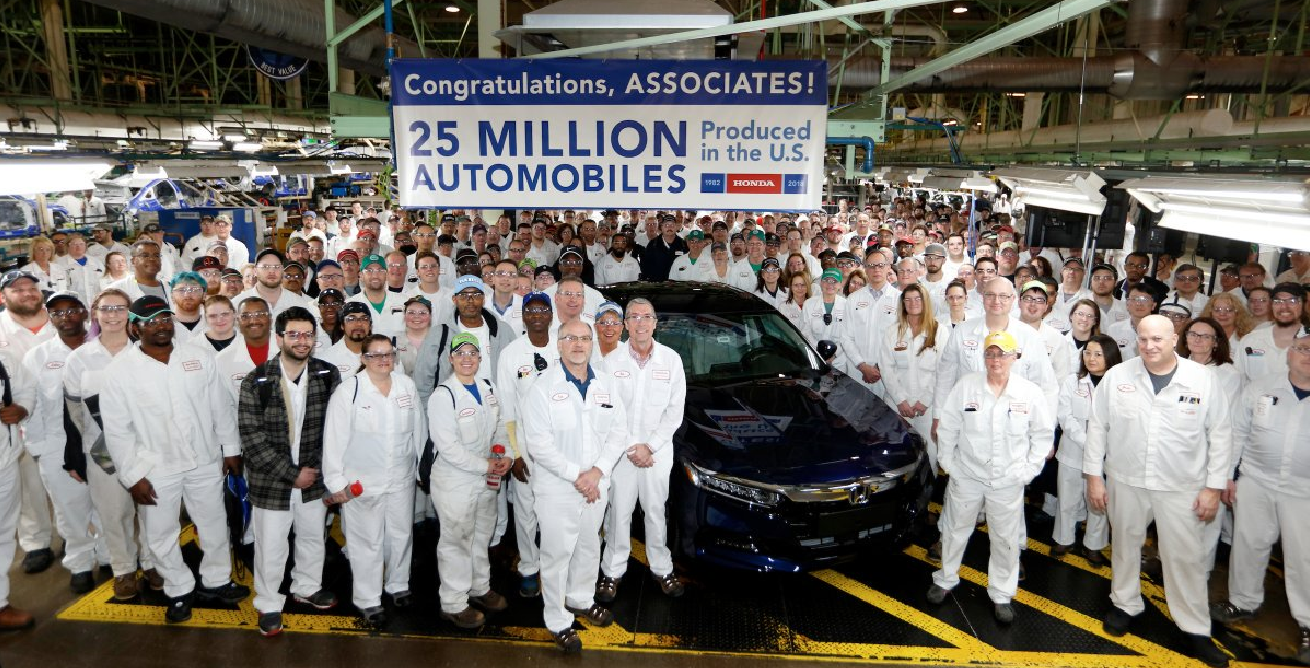 Feb 28, 2018 - MARYSVILLE, Ohio
Honda today built its 25 millionth automobile in the United States, a 2018 Accord produced at the Marysville Auto Plant in Ohio. Beginning production in 1982, the plant made Honda the first Japanese automaker to produce cars in the U.S. and is one of five Honda auto plants now operating in the United States.
Twelve different Honda and Acura cars and light trucks are now produced at the company's five auto plants in Ohio, Alabama and Indiana, along with the engines and transmissions that power them, which are produced in Ohio, Alabama and Georgia. Honda has invested almost $14 billion in its U.S. facilities that support automotive production including $3.4 billion in new investment during the past four years to advance Honda's U.S. operations. Honda also purchases parts and materials from 624 original equipment manufacturers (OEM).
"For over 35 years, Honda associates in America have focused on building high quality automobiles for our customers, a passionate commitment that has enabled us to reach this production milestone," said Tom Shoupe, executive vice president and chief operating officer of Honda of America Mfg., Inc. "This achievement truly represents 25 million customers who put their faith in the Honda brand and we will continue to honor this relationship with a focus on achieving the highest levels of quality and innovation in the next 25 million vehicles."
To celebrate the production milestone, Honda has initiated an annual scholarship fund for students pursuing educations in the fields of engineering, supply chain and manufacturing at Historically Black Colleges and Universities (HBCUs). The initial donation of $25,000 will be administered through the Thurgood Marshall College Fund (TMCF). In addition to the financial support, scholarship recipients will be invited to interview for internships and co-op positions at Honda operations.
"This scholarship highlights Honda's commitment to investing in HBCU students by creating scholarships, internships and opportunities for co-op positions for our scholars," said Dr. Harry L. Williams, TMCF president & CEO. "Without corporate partners like Honda, we would not be able to help deserving students interested in engineering, supply chain management and other related fields achieve the American dream."
Honda has a long tradition of supporting higher education, which includes its support for HBCUs. Honda sponsors the annual Honda Battle of the Bands, a musical showcase and scholarship fund for HBCU bands, and the Honda Campus All-Star Challenge, an academic competition for the best and brightest students from HBCUs.
Marking the occasion at Honda's Marysville Auto Plant was an all-new 2018 Honda Accord in obsidian blue pearl.
The best-selling car in America since its debut in 1976, the 10th-generation Accord was selected as the 2018 North American Car of the Year, following a new-from-the-ground-up redesign that features dramatic new styling, a new body structure and all-new powertrain strategy – including two new turbo engines and the world's first 10-speed automatic transmission for a front-wheel drive car.
About Honda Manufacturing in the United States
Honda has been producing automobiles in America for more than 35 years and currently operates 19 major manufacturing facilities in North America. In 2017, over 65% of all Honda and Acura vehicles sold in the U.S. were made in the U.S., using domestic and globally sourced parts.  Today, Honda manufactures vehicles, engines, transmissions for automobiles, as well as aircraft and aircraft engines, power equipment products; and side-by-side and all-terrain vehicles at 12 manufacturing plants across the country.
Over nearly four decades, Honda has steadily grown its local manufacturing capabilities and today employs more than 20,000 manufacturing associates in the United States. Last year, Honda produced 1.2 million vehicles in the United States using domestic and globally sourced parts.