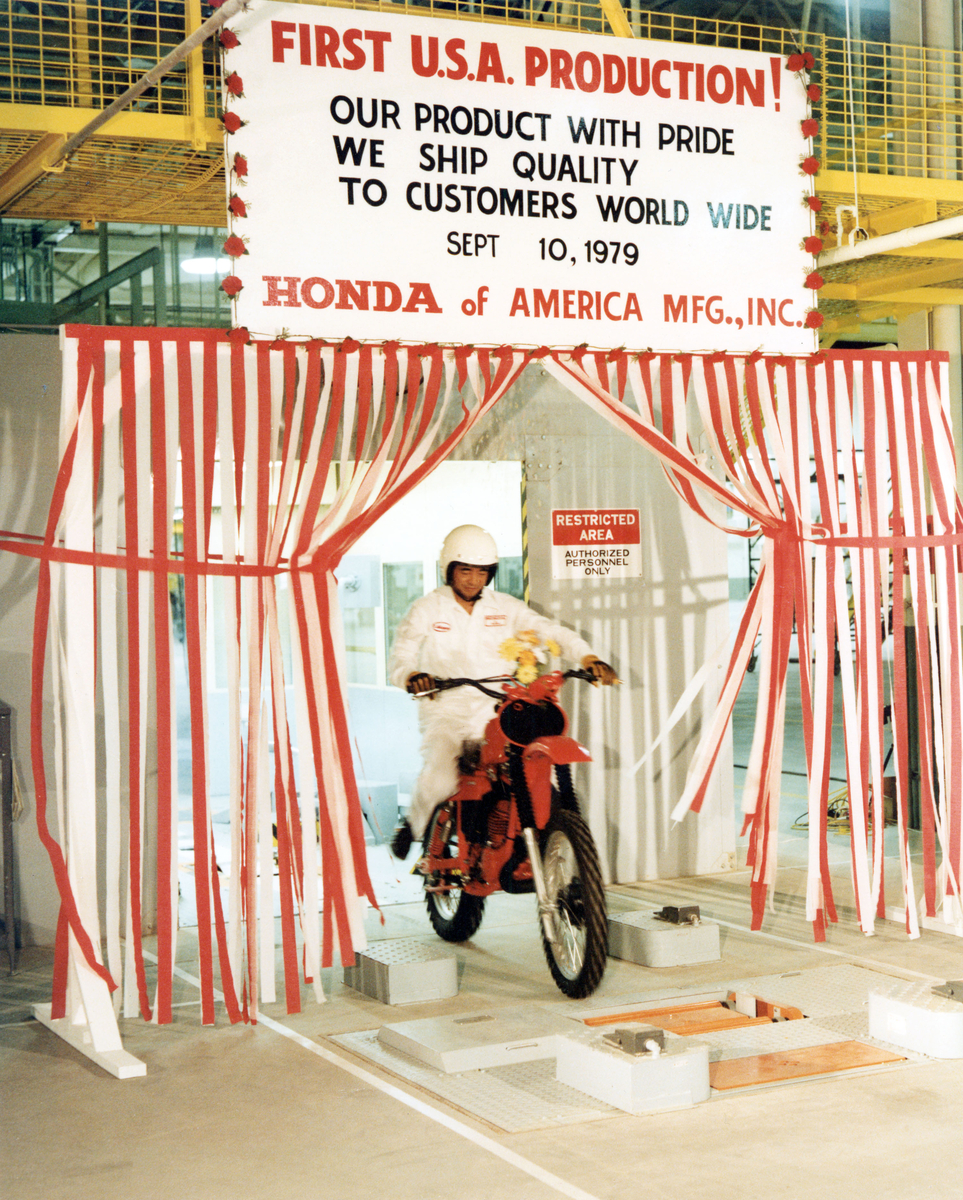 Honda associates today celebrated the 40th anniversary of the historic start of production at Honda of America Mfg., Inc. in Marysville, Ohio, in 1979, when the first 64 associates began producing the Elsinore CR 250 motorcycle, which began the rapid growth of Honda in America.
After Honda became the first Japanese automaker to build products in the U.S., automobile production quickly followed on Nov. 1, 1982, at the adjacent Marysville Auto Plant in Ohio.  Honda now has five U.S. auto plants and in 2018, nearly two-thirds of all Honda and Acura automobiles sold in the U.S. were made in America. With 12 major plants in the U.S., Honda also produces engines and transmissions, ATVs and side-by-side vehicles, a variety of power equipment products and the HondaJet in America.
Moreover, Honda's initial $35 million investment in the Marysville Motorcycle Plant has grown to more than $11 billion in Ohio, and an investment of over $21 billion in Honda's U.S. operations. Honda now employs more than 25,000 associates at its 12 plants in America. Honda also has steadily increased its local purchasing of parts and materials with more than 600 original equipment suppliers in America and cumulative parts purchases of over $440 billion.
"Honda's success in Ohio has always been driven by the dedication and innovative spirit of our associates and this 40th anniversary milestone is a tribute to Honda associates, past and present, who have provided their energy, ideas and passion to create high-quality products for our customers," said Mitsugu Matsukawa, president of Honda of America Mfg." Based on the team we have in Ohio, and the opportunities ahead, I'm excited for the future of Honda in America."
In addition to the commitment to local manufacturing, Honda has invested over $1.1 billion in Honda's U.S. R&D operations, including major centers in Ohio, California, North Carolina and Florida. This year, Honda also marked the 60th anniversary of its business in the U.S., with sales operations established in Los Angeles, California, in June 1959.
Quick Facts: Honda in Ohio
Since Honda began production in Ohio in 1979…

40 Years of Honda Manufacturing in America
Honda marks its 40th anniversary of manufacturing products in America in Sept. 2019. Honda was the first Japanese automaker to produce products in America, beginning with motorcycles in 1979, followed by the start of automobile production in Marysville, Ohio, on Nov. 1, 1982.
Over the course of four decades, Honda has steadily grown its manufacturing capabilities in the region. Honda now employs more than 25,000 associates at 12 plants in America with the capacity to produce more than one million automobiles, three million engines, 400,000 power equipment products and 330,000 powersports products each year, using domestic and globally sourced parts. In 2018, nearly two-thirds of all Honda and Acura automobiles sold in the U.S. were made in America.
Honda also manufactures the HondaJet advanced light jet and GE Honda HF120 turbofan engines in America. Cumulatively, Honda has invested more than $20.2 billion in its American manufacturing capabilities, including more than $5.9 billion over the past five years. The company also works with more than 600 original equipment suppliers in America with cumulative parts purchases of nearly $400 billion over 35 years.