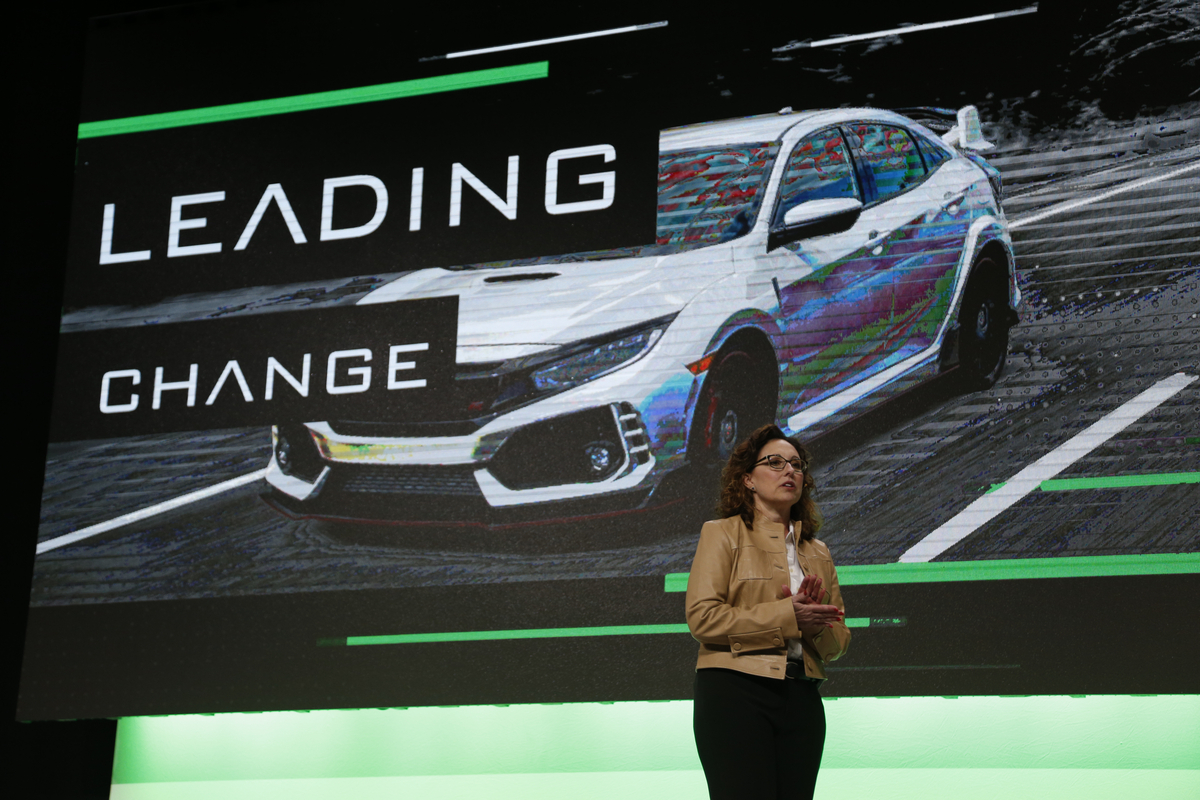 In the year in which Honda is celebrating the 60th anniversary of starting sales in the U.S. and the 40th anniversary of building products in America, the company honored 85 North American suppliers for achievements in supplying parts and materials at the 35th annual Honda Supplier Conference. Representatives from more than 600 original equipment suppliers and more than 400 service parts suppliers attended the event, April 24-25 in Columbus, Ohio.

Honda's main emphasis at the two-day conference was the importance of working collaboratively to lead change and the value of innovation to strengthen future business.

"The value of our suppliers and what they contribute to Honda is critical to our success and our effort to drive innovation into our products and production processes toward the future," said Pam Heminger, vice president for Purchasing, Honda of America Mfg., Inc.

Honda honored suppliers in two areas – those supplying parts and materials for mass production products and companies supplying service parts that serve the needs of customers after they have purchased Honda and Acura products.

"Honda is focused on leading change to ensure that we achieve the highest quality, value and delivery of service parts for Honda and Acura customers of today and tomorrow," said Mark Wiles, assistant vice president for the Parts Division at American Honda Motor Co., Inc. "We see the path to this effort as heightened collaboration, speed and cost competitiveness."

Honda purchased a record $33.6 billion in parts and materials for mass production from North American suppliers in 2018. This supported sales of more than 1.6 million Honda and Acura passenger vehicles last year in North America as the company continued a strong cadence of new product introductions with five completely new or refreshed models in 2018. Honda also purchased more than $1 billion in parts from its Service Parts suppliers in North America last year.

The Supplier Sustainability Award went to Madison Precision Products of Madison, Indiana for demonstrating an exceptional commitment to social responsibility.

Honda has more than 700 (OEM) suppliers that provide parts to 16 Honda plants in North America that produce Honda and Acura automobiles and light trucks and the engines and transmissions that power them.

A special recognition award went to Mitsui Kinzoku ACT Mexicana of Silao, Guanajuato, Mexico for their efforts during the flood at Honda de Mexico in Celaya.

Over the course of four decades, Honda has steadily grown its manufacturing capabilities in the region. Honda now employs more than 25,000 associates at 19 plants in North America with the capacity to produce more than 1.92 million automobiles, three million engines, 400,000 power equipment products and 330,000 powersports products each year, using domestic and globally sourced parts. In 2018, more than 90 percent of all Honda and Acura automobiles sold in the U.S. were made in North America, and nearly two-thirds were made in the U.S., using domestic and globally sourced parts.

Honda also manufactures the HondaJet advanced light jet and GE Honda HF120 turbofan engines in America. Cumulatively, Honda has invested more than $22 billion in its North American manufacturing capabilities, including more than $5.9 billion over the past five years. The company also works with more than 700 original equipment suppliers in North America with cumulative parts purchases exceeding $415 billion over 36 years.

60th Anniversary of Honda in America

Honda will mark its 60th anniversary in America in June 2019, and 40 years of production in America in Sept. 2019. Honda established its first U.S. business operation in Los Angeles, Calif., in 1959. Today, Honda employs more than 31,000 associates in the development, manufacturing, sales and servicing of Honda and Acura automobiles, Honda power equipment and powersports products, the HondaJet advanced light jet and GE Honda HF120 turbofan engines.

Based on its longstanding commitment to "build products close to the customer," Honda operates 12 major manufacturing facilities in America, working with more than 600 suppliers in the region to produce roughly 4 million products annually for customers locally and globally. In 2018, almost two-thirds of the Honda and Acura automobiles sold in the U.S. were produced in America, using domestic and globally sourced parts.

Honda also operates 14 major research and development centers in the U.S. with the capacity to fully design, develop and engineer many of the products Honda produces in America, including Honda and Acura automobiles, Honda side-by-side vehicles and power equipment, as well as the HondaJet.

Excellence in Quality and Delivery

With this award, Honda recognizes suppliers that demonstrate an exceptional commitment to social responsibility based on leadership in the areas of compliance and ethics, environmental, governance, diversity, health and safety, social and trade compliance.

American Honda Motor Co., Inc. honored 40 suppliers for outstanding performance in supplying service parts that serve the needs of customers after they have purchased Honda and Acura vehicles. Honda Service Parts suppliers also were rated on their performance in quality, cost and delivery. Distinct from the OEM supplier awards, the Service Parts awards are based on overall scores reflecting combined performance in all three categories.