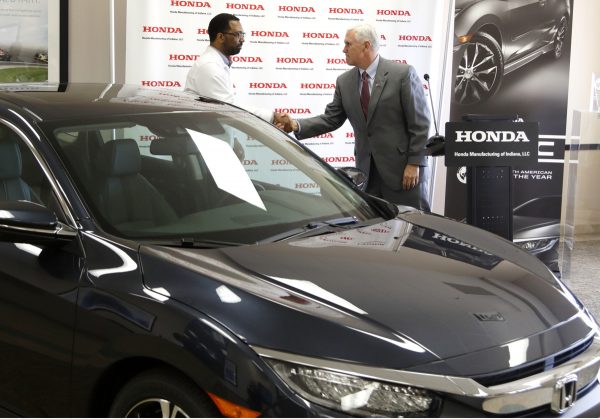 Honda adding 100 new jobs to support launch of Honda CR-V production in 2017
Mar 22, 2016 - GREENSBURG, Ind.
Honda Manufacturing of Indiana, LLC (HMIN) today announced new investment of $52 million and the creation of 100 new jobs to support its early-2017 production startup of the Honda CR-V compact sport-utility vehicle, as Honda invests in its capability to meet strong and growing demand for its light-truck models. Indiana Governor Mike Pence was on hand for the announcement and a tour of the facility.
HMIN announced in January of this year that it would start production of the
Honda CR-V – America's best-selling SUV four years running – beginning in 2017. The new investment at HMIN will leverage the Indiana plant's manufacturing flexibility and production capacity. HMIN will continue to produce the Honda Civic Sedan, giving it both the top retail-selling compact car in America and the outright best-selling SUV.
"The Honda team in Indiana is excited about the challenge to deliver best-selling products like the Civic and CR-V, showcasing outstanding quality and value, and our associates are key to our success," said Bob Nelson, president of HMIN. "This new investment in our Indiana facility will enhance our manufacturing flexibility and better position Honda to meet customer demand for our lineup of innovative and fuel-efficient passenger cars and light trucks."
"Honda has been a great partner to the state of Indiana from the moment the company announced plans to establish a facility in Greensburg in 2006," said Governor Pence. "I have had the pleasure of meeting with the company's leadership here in the United States and in Japan, and I am proud that they have once again chosen Indiana for growth. The automotive industry in Indiana supports more than 100,000 Hoosier jobs, and that number will continue to grow thanks to the commitment of companies like Honda."
Honda also showcased the new Associate Resource Center (ARC), a career development facility designed to promote the advancement of HMIN associates' manufacturing skills. The ARC reflects a larger Honda commitment to workforce development in North America. "Our Honda associates are our foundation and this new training facility will provide them with the opportunity to continue to grow and develop their skills," Nelson said.
About Honda Manufacturing of Indiana (HMIN)
HMIN became Honda's fourth auto plant in the U.S. and its seventh in North America when it began production of Civic sedans on October 9, 2008. It began production of the all-new 10th generation 2016 Honda Civic in October 2015. With employment of over 2,300 associates and capital investment exceeding $900 million, HMIN manufactures automobiles primarily for the U.S. market, and for export to markets outside of North America. HMIN has the capacity to produce 250,000 vehicles annually and last year purchased more than $2.4 billion in OEM parts from 57 suppliers. HMIN maintains one of the lowest environmental footprints of any automobile plant in Honda's global production network.
About Honda in North America
Honda became the first Japanese automaker to manufacture cars in the U.S. in 1982 with the opening of its Marysville, Ohio, auto plant. Honda now operates 18 manufacturing facilities in North America, including eight automobile plants with the capacity to produce nearly 2 million Honda and Acura automobiles annually, using domestic and globally sourced parts. In 2015, more than 99 percent of all Honda and Acura automobiles sold in the U.S. were made in North America, using domestic and globally sourced parts. The company has invested more than $22 billion in its North American manufacturing operations with cumulative purchases from North American parts suppliers surpassing $330 billion.