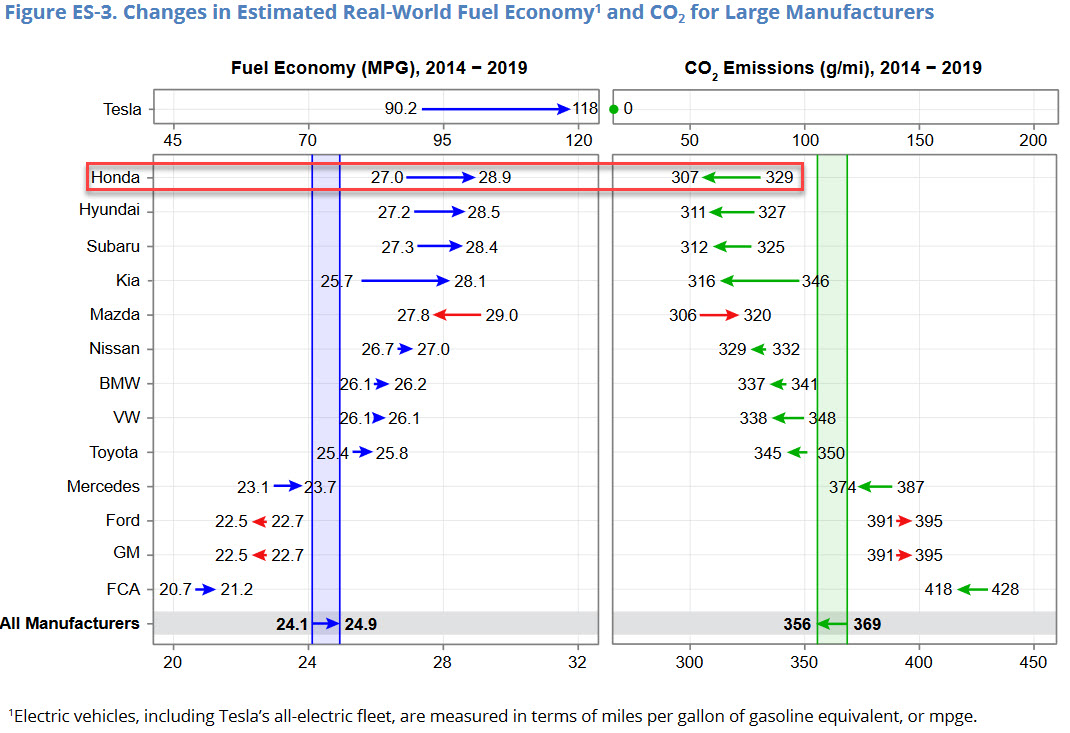 Continuing a more than 40-year history of fuel-efficiency leadership, Honda ranks as the most fuel-efficient full-line automaker in America in a new report from the U.S. Environmental Protection Agency (EPA) released on Wednesday. Honda has the highest fleet average fuel economy and lowest CO2 emissions of any full-line automaker for the 2019 model year (MY2019), the latest year for which full data is available, forming the basis of the report.
The 2020 EPA Automotive Trends Report ranked Honda first among full-line automakers and second overall with a U.S. fleet average “real world” fuel economy of 28.9 miles per gallon (mpg), a five-year improvement of 1.9 mpg, and 4 mpg higher than the industry average for MY2019. Similarly, Honda’s fleet average CO2 emissions was 307 grams/mile, an improvement of 22 grams/mile from 2014 results and 49 grams/mile lower (better) than the industry average for the 2019 model year.
The EPA's very first ranking of America's most fuel efficient vehicles in 1976 had the Honda Civic ranked number one, and subsequent reports have consistently shown Honda among the leaders in EPA’s annual fuel efficiency measurements. That means that for more than 40 years, Honda has made fuel efficiency a priority in its products.
In 2020, Honda set a new all-time record for sales of electrified vehicles in America, growing sales by 4.5% amid significant market challenges.
In an effort to reduce CO2 emissions, globally, Honda intends for two-thirds of its automobile sales to be electrified by 2030 and is making substantial investments for the production of electrified vehicles in America1, including the recently-refreshed Accord Hybrid, CR-V Hybrid, Insight and the Acura NSX hybrid supercar.
Honda’s Commitment to the Environment
Based on its vision of "Blue Skies for our Children," Honda is working to advance technologies that address society's environmental and energy concerns. The company intends for electrified vehicles to comprise two-thirds of its global automobile sales by 2030. In North America, the Honda Electrification Initiative will see Honda’s electrified powertrain technologies applied to an expanding portfolio of cars and light trucks in the years ahead. Honda’s electrified vehicle lineup today includes the Accord Hybrid, CR-V Hybrid and Honda Insight, and the Clarity series.
Honda is working to reduce the environmental impact of its products throughout their life cycle, including reducing waste, emissions and further improving the energy efficiency of producing, distributing and selling Honda and Acura products in North America. This includes a 93 percent reduction in waste sent to landfills from Honda plants in North America.
Through its “green purchasing” and “green dealer” initiatives, the company also is working to promote more environmentally responsible business practices with its more than 600 original equipment suppliers and 1,300 retail dealer partners.