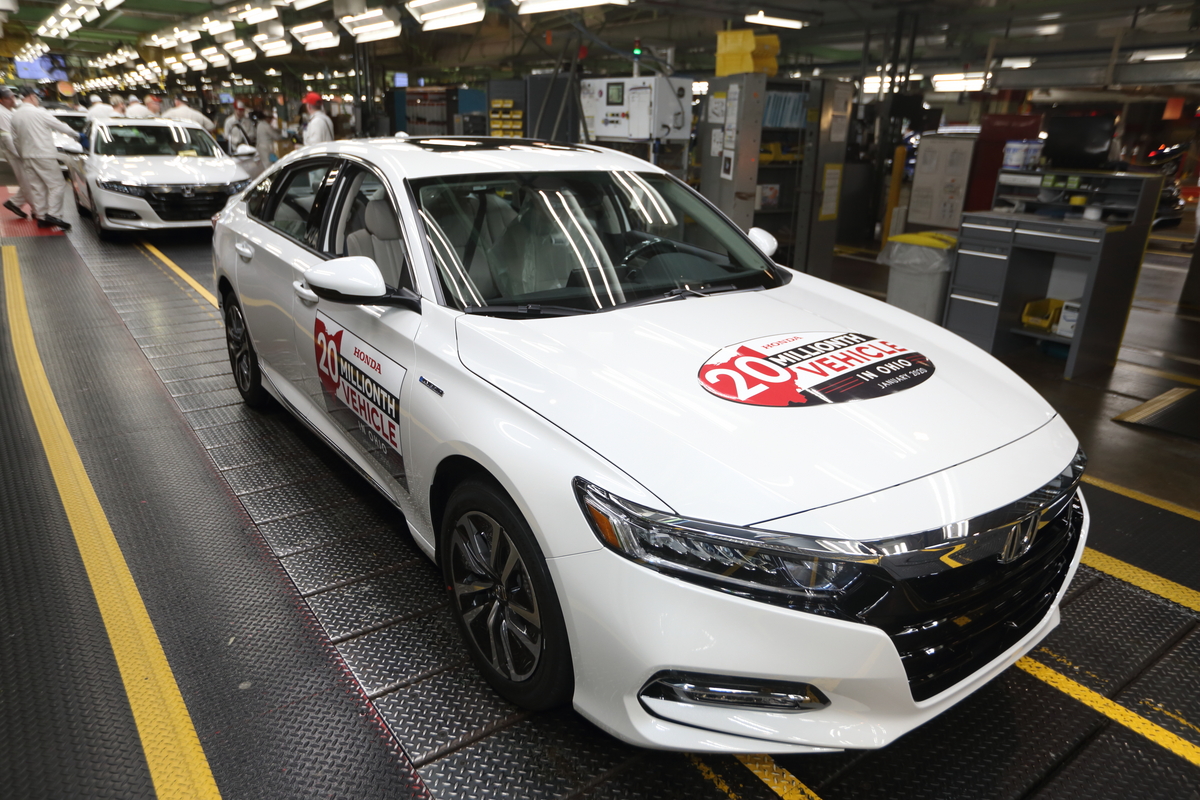 January 13, 2020 — MARYSVILLE, Ohio
Associates at Honda of America Mfg. reached a major milestone today with production of the company’s 20 millionth automobile in Ohio. Associates cheered as a 2020 Platinum White Pearl Honda Accord Hybrid rolled off the production line at the Marysville Auto Plant, Honda’s first auto plant in America. The 20 million vehicles reflect the cumulative output of Honda’s three Ohio auto plants: the Marysville Auto Plant, the East Liberty Auto Plant, and the Performance Manufacturing Center.
Established in 1982, the Marysville Auto Plant, with two production lines, is Honda’s largest vehicle production facility in the country. In 1989, Honda added a second auto plant in Ohio, the East Liberty Auto Plant. The company began Ohio production of the Acura NSX supercar in 2016 at its newly-established Performance Manufacturing Center in Marysville. Honda also builds engines and transmissions in Ohio at the company’s Anna Engine Plant and Honda Transmission Manufacturing of America.
"Honda associates in Ohio have played a significant role in our U.S. operations, and today we celebrate the production of 20 million high quality cars and light trucks for our customers in Ohio, America and around the world," said Mitsugu Matsukawa, president of Honda of America Mfg. "This milestone not only showcases the success of our products, but the dedication, capability and collaboration of our 15,000 Honda associates in Ohio."
Honda’s initial $35 million investment to build motorcycles in Marysville in 1979 has grown to more than $13 billion in its Ohio facilities. The 20 million production milestone in Ohio represents nearly 75 percent of Honda’s total U.S. automobile production since 1982. Following is a plant by plant breakdown of Honda’s Ohio vehicle production:

Honda’s first Ohio-produced automobile was a Honda Accord Sedan. Today, the company’s Ohio plants produce Honda and Acura brand cars and light trucks. Following is a list of all of the models that have been produced at Honda’s Ohio plants over the years:

Honda’s total U.S. investment now exceeds $21 billion, including automobile plants in Alabama and Indiana. Honda has produced a cumulative total of 27.3 million cars and light trucks in the U.S. 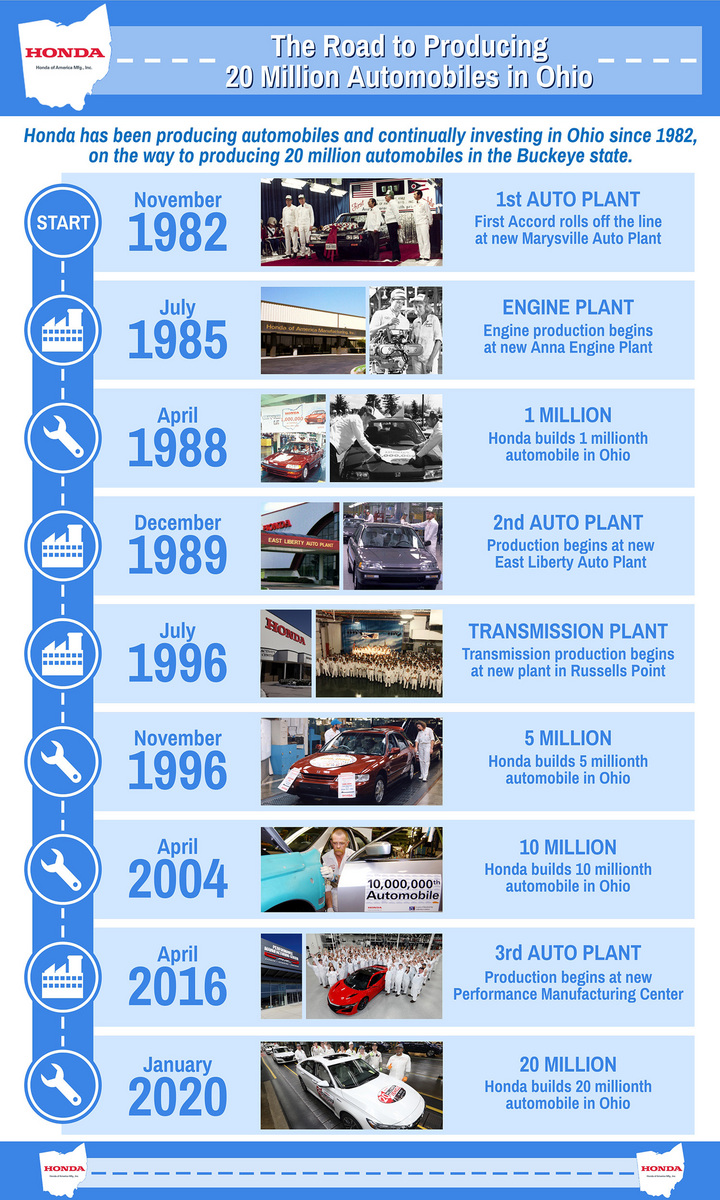 About Honda Manufacturing in the United States
Honda marked its 40th anniversary of manufacturing products in America in Sept. 2019. Honda was the first Japanese automaker to produce products in America, beginning with motorcycles in 1979, followed by the start of automobile production in Marysville, Ohio, on Nov. 1, 1982.
Over the course of four decades, Honda has steadily grown its manufacturing capabilities in the region. Honda now employs more than 25,000 associates at 12 plants in America with the capacity to produce more than one million automobiles, three million engines, 400,000 power equipment products and 330,000 powersports products each year, using domestic and globally sourced parts. In 2019, nearly two-thirds of all Honda and Acura automobiles sold in the U.S. were made in America.
Honda also manufactures the HondaJet advanced light jet and GE Honda HF120 turbofan engines in America. Cumulatively, Honda has invested more than $21 billion in its American manufacturing capabilities. The company also works with more than 600 original equipment suppliers in America with cumulative parts purchases of nearly $400 billion over 36 years.