Honda Reports on its Environmental Performance in North America 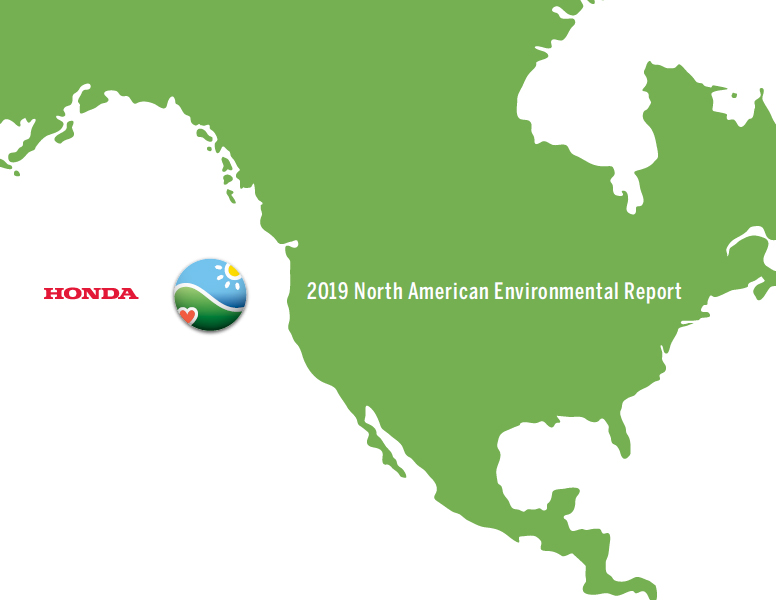 September 30, 2019 — MARYSVILLE, Ohio
Honda's U.S. fleet-average fuel economy rose for the 8th straight year
CO2e emission intensity of auto manufacturing down 21 percent over 9 years
Manufacturing plants reduced total waste to lowest levels in five years
Honda today released its 2019 North American Environmental Report (NAER) detailing the company's environmental activities in North America and disclosing the results of its efforts over the fiscal year ended March 31, 2019 (FY 2019).
The 46-page report details the major environmental impacts of Honda's activities in the North America region, with a focus on greenhouse gas emissions, but also including factors such as water use, waste and air emissions resulting from various aspects of the company's operations.
"We are determined to continue reducing the environmental impact of our products and operations," said Shinji Aoyama, president & CEO of American Honda Motor Co. Inc. and Honda North America, Inc. "Through our environmental initiatives, we will work toward our long-term vision for a zero-carbon society, while creating products that satisfy our customers and fulfill our commitment to use technology to help people."
The 2019 NAER is Honda's 15th annual report on the environmental impact of its operations in North America and covers the period from April 1, 2018 to March 31, 2019 (fiscal year 2019). Additional information on Honda's environmental initiatives in the region can be found on the Honda Corporate Social Responsibility website.
2019 North American Environmental Report Highlights:
Manufacturing
The CO2e emissions intensity of automobile production was down 5.3 percent from the previous year and has been reduced 27 percent over a nine-year period, from 727 kg/auto in FY2011 to 569 kg/auto in FY2019.
Total solid waste from manufacturing activity in the region was reduced 4.2 percent to 157 kg/auto, the lowest level in five years.
Waste to landfills remained level at 2,900 metric tons as the company's plants continued to operate with less than one percent of waste sent to landfill.
Total water use in manufacturing fell 3.9 percent to 1.35 million gallons, while the water use intensity of automobile production fell 1.9 percent in the same period to 754 gallons/auto, both at four year lows.
Sales and Service
Ninety-nine percent of the waste from Honda's 12 U.S. parts warehousing and distribution centers was recycled in FY19
The CO2 emissions intensity of North American service parts shipments fell 2.6 percent from a year ago and has been reduced 47.5 percent over the past decade.
Products In-Use
For model year 2018, the unadjusted average fuel economy of the company's U.S. automobile fleet1 rose 1.3 percent, or 0.5 mpg, to 38.6 mpg and was 18 percent higher (better than) the industry average of 32.7 mpg.
In the same period, the unadjusted average CO2 emissions of the company's U.S. automobile fleet also fell 1.3 percent, or 7 grams/mile (g/mi) to 230 g/mi and was2 15.1 percent below (better than) the industry average of 271 g/mi.
The average fuel economy of Honda U.S. motorcycle fleet3 in model year 2018 was up 77 percent from the model year 2000 baseline
Alternative Energy
Honda implemented a solar energy system at its U.S. sales headquarters in Torrance, Calif., which is one of the largest on a commercial building in Southern California, and at 2.0 megawatts direct current, is one of Honda's largest on-site renewable energy installations anywhere in the world.
Honda continued to derive more than 10 percent of its energy needed for the Russells Point, Ohio Honda Transmission Manufacturing of America, Inc. plant via two 1.7MW wind turbines located on its property.
Additional information on Honda's environmental performance outside of North America can be found in Honda Motor Company's Sustainability Report.
Honda Environmental Commitment
Based on its commitment to leave "Blue Skies for our Children," Honda is working to advance technologies that address society's environmental and energy concerns. The company seeks to reduce or eliminate the use of substances of concern (SOCs) and scarce natural resources in the design of its vehicles, significantly reduce the CO2 intensity and water use of its manufacturing operations, continue to decrease CO2 emissions from the transportation of vehicles from its plants to dealers, and expand the involvement of U.S. Honda and Acura dealers as well as powersports, power equipment and marine dealers in its "Green Dealer" program.
These activities reinforce Honda's goal to voluntarily reduce its total corporate CO2 emissions by 50 percent by the year 2050, compared to 2000 levels. In 2006, Honda was the first auto company to voluntarily and publicly commit to global reductions in its CO2 emissions.
# # #
1. Source: U.S. Environmental Protection Agency: Light-Duty Automotive Technology, Carbon Dioxide Emissions, and Fuel Economy Trends: 1975 through 2018, published May 2019
2. Source: U.S. Environmental Protection Agency: Light-Duty Automotive Technology, Carbon Dioxide Emissions, and Fuel Economy Trends: 1975 through 2018, published May 2019
3. Honda calculation using U.S. EPA exhaust emissions data. FY00-09 data are based on actual sales, while 2010 and later are based on production volumes. Some MY production is sold in later years (ex: a 2009 MY motorcycle that is sold new in 2011) and was omitted by the earlier method.