May 5, 2016 – LINCOLN, Ala. More than 1,500 associates at Honda Manufacturing of Alabama (HMA) today celebrated the start of mass production of... 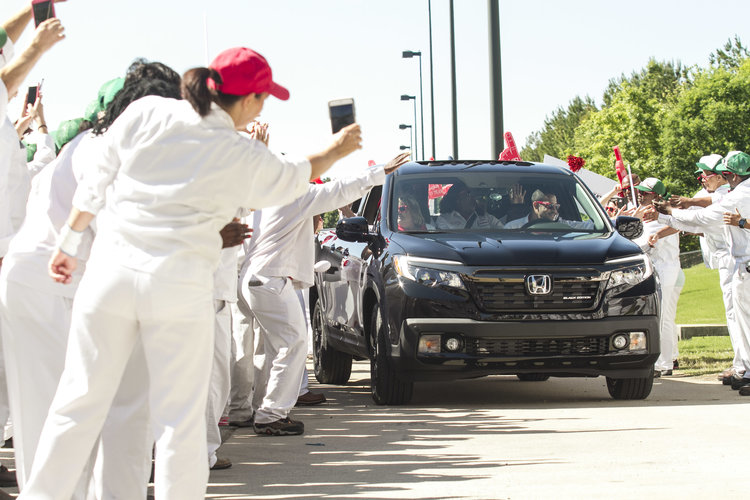 May 5, 2016 - LINCOLN, Ala.
More than 1,500 associates at Honda Manufacturing of Alabama (HMA) today celebrated the start of mass production of the all-new 2017 Honda Ridgeline pickup truck, slated to go on-sale soon at Honda dealerships nationwide. HMA is the exclusive manufacturer of the innovative Ridgeline that is once again challenging conventional thinking in the pickup truck market with Honda-exclusive features, design and technology that help Ridgeline set new benchmarks for versatility, capability and comfort in the midsize pickup segment.
"Today we celebrate the dedication of our Alabama team in bringing a very innovative new pickup truck to market," said Jeff Tomko, president of HMA. "I congratulate all of our associates for their commitment to our customers as the Ridgeline returns with new features that will deliver even more of what today's truck customers want and need."
Designed, developed and manufactured in America, the new Ridgeline will launch with features and capabilities unlike anything else on the market today, including:
Superior on-road performance – with the segment's best handling, ride quality, cabin quietness and all-weather traction capabilities – courtesy of its unibody construction, sophisticated chassis, and available i-VTM4™ torque-vectoring AWD system
Class-leading space – with the largest and most versatile cabin and the only 4-foot-wide flat bed space in the midsize pickup segment, along with payload capacity at the top of the midsize pickup class
Innovative and class-exclusive features, including an In-Bed Trunk™, Dual Action tailgate and the industry's first Truck Bed Audio system – making Ridgeline the ultimate tailgating vehicle
Leading edge connectivity with 8-inch Display Audio featuring Apple Car Play® and Android Auto™ compatibility
The Ridgeline is produced in the same plant in Alabama alongside other members of Honda’s award-winning light-truck lineup, including the Pilot sport utility vehicle and Odyssey minivan, as well as the Acura MDX luxury SUV.
A first for any pickup, the new Truck Bed Audio system and available 400-watt power inverter, help make Ridgeline the ultimate tailgating vehicle. The new system utilizes six exciters located inside the bed walls, in place of conventional speakers, pumping out sound from the Ridgeline's audio head unit, with up to 540 watts of power.
In 2016, Honda will continue the fortification of its light-truck family of vehicles with the new Ridgeline and a new, fully redesigned Odyssey minivan. Honda was named the "2016 Best SUV Brand" by U.S. News and World Report, and the Pilot, CR-V, HR-V and Odyssey each has earned a "Best Buy" award from Kelly Blue Book for 2016. The 2016 Pilot and CR-V have received a TOP SAFETY PICK+ rating from the Insurance Institute for Highway Safety for model year 2016, while the 2016 Odyssey minivan has earned a TOP SAFETY PICK rating.
About HMA
Honda Manufacturing of Alabama (HMA) employs 4,500 associates at its 3.7-million-square-foot Lincoln facility has the capacity to produce as many as 340,000 vehicles and engines each year. Over the past three years, HMA has invested more than $510 million and added 450 jobs in expansion efforts designed to enhance manufacturing flexibility and increase annual production. The Alabama plant is celebrating its 15th year of production.
About Honda
Honda established operations in America in 1959 and now employs more than 40,000 associates in its North American sales, R&D and manufacturing operations with total capital investment in North America exceeding $22 billion. Based on its longstanding commitment to "build products close to the customer," Honda operates 19 major manufacturing facilities in North America producing a wide range of Honda and Acura automobiles, automobile engines and transmissions, Honda all-terrain vehicles, power equipment products, such as lawn mowers, mini-tillers and general purpose engines, and the Honda Jet advanced light jet.
Nine Honda auto plants in the region, including four in the U.S., have the capacity to produce 1.92 million automobiles each year. In 2015, more than 99 percent of the Honda and Acura automobiles sold in the U.S. were produced in North America. Those plants today manufacture 11 different models, including five passenger cars and six light trucks using domestic and globally sourced parts. Honda also operates 14 major research and development centers in the U.S. with the capacity to fully design, develop and engineer many of the products Honda produces in North America.