Apr 25, 2017 – LINCOLN, Ala. More than 1,500 associates at Honda Manufacturing of Alabama (HMA) today celebrated the start of mass production of... 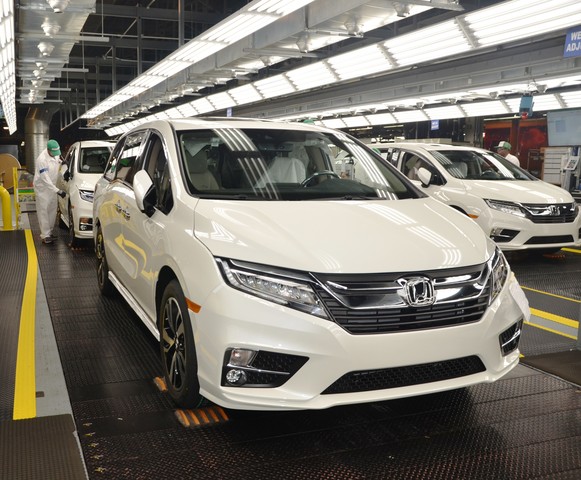 More than 1,500 associates at Honda Manufacturing of Alabama (HMA) today celebrated the start of mass production of the all-new 2018 Honda Odyssey minivan, slated to go on-sale this spring at Honda dealerships nationwide. HMA is the exclusive manufacturer of the family-friendly Odyssey – the most popular minivan in America in each of the past seven years1.
"This is a celebration for our entire Honda team of associates who have been committed to bringing an all-new, high tech, family-friendly Odyssey to our customers," said Jeff Tomko, president of HMA. "I congratulate all of our associates for their commitment to quality for this new vehicle, which ushers in a new level of features and functionality with the goal of creating new value for our customers."
HMA is the sole production source of the Odyssey minivan, Pilot SUV and Ridgeline pickup truck, which was named 2017 North American Truck of the Year at the North American International Auto Show in Detroit. HMA also builds the Acura MDX luxury SUV and the V-6 engines that power each vehicle.
The 2018 Odyssey is the fourth generation to be built in Alabama, and the second generation of Odyssey to be designed and developed in the United States.
HMA has made significant investments in new technologies to advance the performance, quality and value of the 2018 Honda Odyssey, including a new process for the installation of acoustic spray foam in 14 locations within the vehicle body, helping deliver best-in-class cabin quietness in the new Odyssey minivan.
HMA started production on Nov. 14, 2001 with the second generation Odyssey. Since that date, HMA has built more than 4 million vehicles and V6 engines at the Lincoln, Alabama facility. The 2018 Odyssey is the fourth all-new model to roll off the production line at HMA in just the past five years.
About the Odyssey
For upper grades of Odyssey, the new 280-horsepower i-VTEC® V6 engine (+32 hp vs. the outgoing model) is paired with an all-new 10-speed automatic transmission – the first of its kind for front-wheel-drive vehicles – produced exclusively at Honda Precision Parts Georgia (HPPG) in Tallapoosa, Georgia.
Through five generations, the Odyssey has evolved to meet the changing needs of American families. Odyssey has been the most popular minivan in America in every year since 2010 and is leading again this year1. Americans have purchased more than 2.5 million Odyssey minivans since its 1994 debut.
The next generation 2018 Honda Odyssey brings a host of new features and technologies, including:

About Honda
Honda began its operations in Los Angeles, California, in 1959. Today, Honda companies in America represent a cumulative investment of more than $17 billion and employ more than 30,000 associates in the design, development, manufacture, marketing, financing and servicing of Honda and Acura automobiles, Honda powersports products, Honda power equipment products and the HondaJet advanced light jet and GE-Honda HF 120 jet engines.
Honda has been producing products in America for more than 37 years using domestic and globally sourced parts and currently operates 12 major manufacturing facilities in the U.S., including five auto plants. Honda also operates 16 major research and development centers in the U.S. with the capacity to fully design, develop and engineer many of the products Honda produces in North America. In 2016, more than 68 percent of all Honda and Acura automobiles sold in the U.S. were made in America, more than any other major automaker except one.
1. Based on Urban Science retail sales data in the minivan segment for 2010-2017 CYTD March