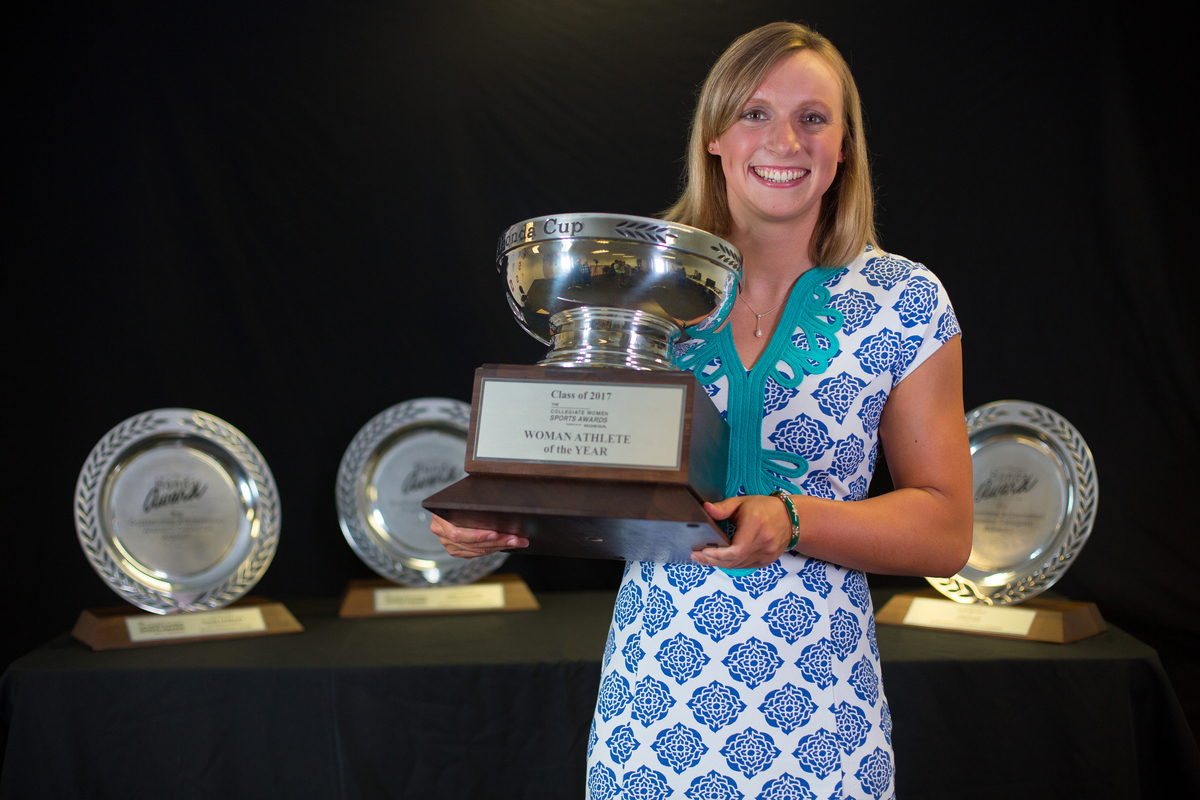 Freshman Olympian Katie Ledecky (Bethesda, Md.) of the Stanford University Swimming & Diving team was named the Collegiate Woman Athlete of the Year and presented with the prestigious Honda Cup during the live broadcast of the Collegiate Women Sports Awards (CWSA) show presented by Honda on CBS Sports Network, at the USC Founders Club at Galen Center in Los Angeles. As presenting sponsor, Honda has supported women's athletics programs for more than 30 years.
The "Top Three" finalists from the Class of 2017 included Ledecky along with senior basketball star Kelsey Plum of the University of Washington and senior track & field sensation Kendell Williams from the University of Georgia.
The "Top Three" were selected by a voting of nearly 1,000 NCAA member schools and the Honda Cup winner was chosen by the Board of Directors of the Collegiate Women Sports Awards program. Previous Honda Cup winners include Olympic basketball player Breanna Stewart (2016), swimming standout Missy Franklin (2015), basketball superstars Maya Moore (2011, 2012) and Candace Parker (2008), track & field legend Jackie Joyner-Kersee (1985), soccer great Mia Hamm (1994) and volleyball star Misty May (1999).
Ledecky is the seventh swimmer from Stanford since Tara Kirk took the honor in 2004. Overall, this is Stanford's third Honda Cup winner behind Kirk and most recently Ogonna Nnamani (Volleyball) in 2005.
The most decorated American female athlete at the Rio Olympic Games (four golds, one silver and two World Records), nine-time World Champion and two-time Olympian, Ledecky capped one of the most impressive freshman campaigns in NCAA history with five national titles, the most in the nation, at the NCAA Championships.
The Bethesda, Maryland native was the first NCAA swimmer in 29 years to capture individual NCAA titles in the 200, 500 and 1650-free, and was a member of Stanford's American record-setting 400 free and 800 free relays. A five-time All-American, Ledecky broke the American and NCAA record in the 500 free, and bested her own NCAA mark in the 1000 free en route to the national title in the 1650 free, an event she won by more than 20 seconds. Ledecky won four conference titles (all in American record time) at the Pac-12 Championships, was named the Pac-12 Championship Swimmer of the Meet, and was the only swimmer twice named Pac-12 Swimmer of the Month during Stanford's undefeated dual meet season.
In total, over the course of her first season at Stanford, Ledecky set five individual American records and seven individual NCAA records in three different events, and broke Stanford team records in five different individual events. A standout in the classroom as well, Ledecky has now broken 13 World Records and 30 American Records in her swimming career.
"For over 30 years, Honda has partnered with the Collegiate Women Sports Awards to recognize and celebrate the incredible student-athletes who have persevered and powered their dreams," said American Honda Vice President of Corporate Relations & Social Responsibility, Steve Morikawa. "These women are exemplary role models who are paving the way for the next generation of great female athletes."
"Amid an outstanding Class of 2017 that truly represented the 'best of the best', the Honda Cup winner, Katie Ledecky, once again reflects the extraordinary," stated Chris Voelz, CWSA Executive Director.
"On this 45th anniversary of Title IX it is particularly meaningful to reflect on the opportunities that young girls like Katie had on their way to being a world class female athlete on the shoulders of her mother who was one of the first beneficiaries of Title IX. Congratulations to the second freshman ever in our 41-year history! I have no doubts that Katie will be an incredible ambassador for The Collegiate Women Sports Awards and all of women's sports!"
In addition to the announcement of the Honda Cup winner as the Collegiate Woman Athlete of the Year, the broadcast featured the presentation of the Honda Inspiration award to Nicole Stafford (Stanford, Swimming & Diving), the Honda Division II Athlete of the Year to Carly Muscaro (Merrimack, Track & Field) and the Honda Division III Athlete of the Year to Lizzy Crist (Washington Univ. in St. Louis, Soccer).
The CWSA, celebrating its 41st year, has honored the nation's top NCAA women athletes for their superior athletic skills, leadership, academic excellence and eagerness to participate in community service. Since commencing its sponsorship in 1986, Honda has provided more than $3.1 million in institutional grants to the universities of the award winners and nominees to support women's athletics programs.
About Honda
Honda seeks to be a company that society wants to exist, creating products and technologies that improve the lives of people while minimizing the environmental impacts of its products and business operations to ensure a sustainable future for society. Honda is also committed to making positive contributions to the communities where we do business, to socially responsible business practices and to the promotion of diversity in our workforce. From our involvement in STEM education and Historically Black Colleges and Universities (HBCUs) to our support of pediatric brain tumor research, and volunteer efforts by Honda associates, including environmental clean-up activities, Honda believes in giving back to the communities where we live and work.
Honda supports a variety of initiatives aimed at advancing education and creating experiences of discovery that help young people see and achieve their own dreams. Honda's partnership with the Hispanic Scholarship Fund is one of many programs demonstrating Honda's commitment to the Latino community and to helping young people access The Power of Dreams. Find out more at csr.honda.com.