Jun 7, 2019 – MARYSVILLE, OH Beginning today, more than 25,000 volunteers across North America from Honda companies, dealers and suppliers will participate in the... 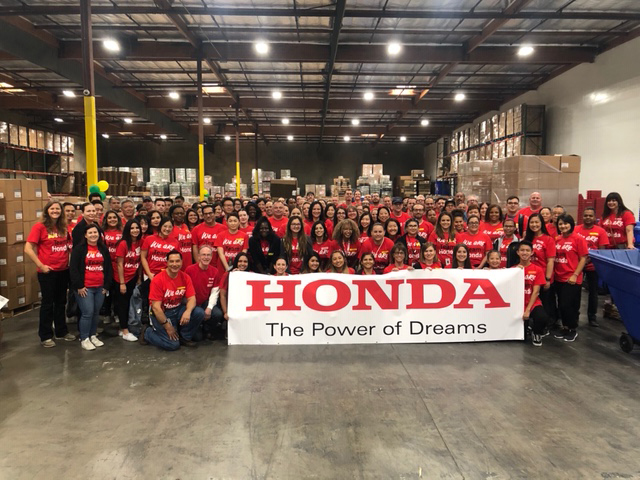 Beginning today, more than 25,000 volunteers across North America from Honda companies, dealers and suppliers will participate in the fourth annual Team Honda Week of Service. This will include a record-setting 593 volunteer service activities in 42 states, as well as Canada and Mexico.
This year, the Team Honda Week of Service coincides with the 60th anniversary of American Honda Motor Co., Inc., the first Honda company established in America, on June 11, 1959. As Honda celebrates 60 years of operations in America, the company remains strongly committed to giving back to the communities where its associates and business partners live and work.
"Honda has been in North America for 60 years and continually strives to be a company that society wants to exist," said Rick Schostek, executive vice president, Honda North America, Inc. "We value giving back to the communities that have supported us and Honda is proud of the 25,000 volunteers who will be making a positive impact on the places we call home."
The 10-day Week of Service began with a virtual kick-off at noon (EST), when many of the participating volunteers posted to social media using the hashtag #TeamHondaCares. For updates and reactions to the Team Honda Week of Service activities, more information is available online at:

The Team Honda Week of Service continues to grow from its start in 2016 when 425 activities were conducted across 41 states. Over the past three years, volunteers have provided assistance through a variety of activities that include food drives, blood drives, adopt-a-pet events, home repair projects and providing meals at homeless shelters, among many other service activities.
Since its inception, the community impact from the annual event has resulted in more than 2,500 bags of trash cleaned up; nearly 2,350 pints of blood donated; more than 120 tons of food collected and more than 600,000 meals served.
Honda Corporate Social Responsibility
Honda seeks to be a company that society wants to exist, creating products and technologies that improve the lives of people while minimizing the environmental impacts of its products and business operations to ensure a sustainable future.
Honda also is committed to making positive contributions to the communities where it does business, conducting socially responsible business practices and promoting diversity in its workforce. From Honda's involvement in STEM education and Historically Black Colleges and Universities (HBCU) to its support of pediatric brain tumor research and volunteer efforts by Honda associates, including environmental clean-up activities, Honda believes in giving back to the communities where its associates live and work. Learn more at http://csr.honda.com/
60th Anniversary of Honda in North America
Honda marks its 60th anniversary in North America on June 11, 2019, and 40 years of production on Sept. 2019. Honda established its first U.S. business operation in Los Angeles, Calif., in 1959. Today, Honda employs more than 31,000 associates in the development, manufacturing, sales and servicing of Honda and Acura automobiles, Honda power equipment and powersports products, the HondaJet advanced light jet and GE Honda HF120 turbofan engines.
Based on its longstanding commitment to "build products close to the customer," Honda operates 12 major manufacturing facilities in America, working with more than 600 suppliers in the region to produce roughly 4 million products annually for customers locally and globally. In 2018, almost two-thirds of the Honda and Acura automobiles sold in the U.S. were produced in America, using domestic and globally sourced parts.
Honda also operates 14 major research and development centers in the U.S. with the capacity to fully design, develop and engineer many of the products Honda produces in America, including Honda and Acura automobiles, Honda side-by-side vehicles and power equipment, as well as the HondaJet.