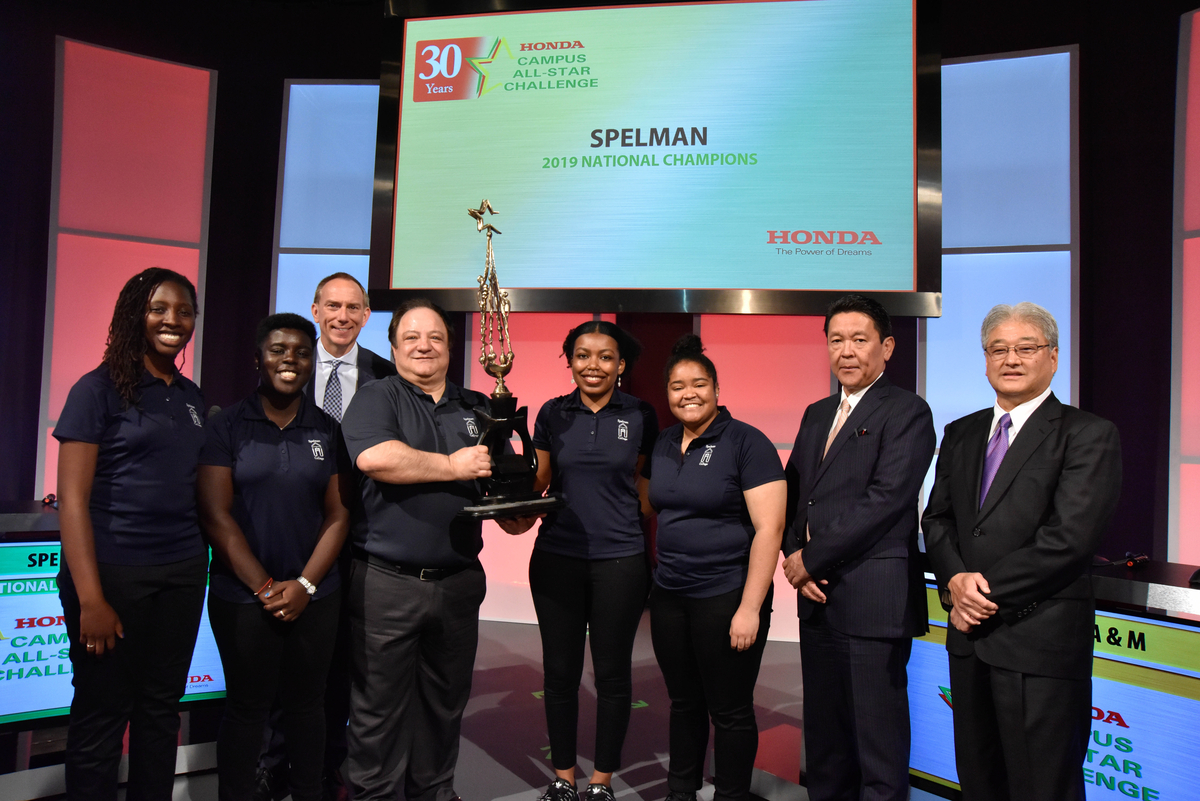 Hosted on the Honda campus in Torrance, California, HCASC is the only program of its kind and provides a national stage for high-achieving HBCU students to advance their dreams. Each year, Honda awards more than $350,000 in institutional grants to participating HBCUs in addition to providing travel, meals and accommodations for the 48 teams.

In a two game sweep against Florida A&M University, the Spelman team demonstrated superior academic prowess, gameplay and teamwork by accurately answering questions about history, science, literature, religion, the arts and pop culture. Spelman bested teams from 47 HBCUs and qualified for the National Championship Tournament after winning a series of regional competitions throughout the academic year.

“Winning itself isn’t the only reward. It’s about bringing these students together and watching them represent their school in the best possible way,” said Daniel Bascelli, coach, Spelman College. “The spirit at Spelman is really strong. If you talk to the students, the feeling for Spelman, the feeling for HCBCUs and the support that Honda gives them is all a part of the pride that they feel.”

Runner-up Florida A&M University was awarded a $30,000 grant, while the third and fourth place finishers – Jackson State University and Morehouse College – received $20,000 each. This year’s HCASC theme was “30 Years of Advancing Dreams.”

“Honda is proud to commemorate the 30th annual Honda Campus All-Star Challenge and continue shining a spotlight on HBCU students’ academic talents,” said Steve Morikawa, vice president of Corporate Relations and Social Responsibility at American Honda. “Through HCASC, students are given an opportunity to demonstrate the value of their HBCU experience, represent their schools on a national stage, and connect with like-minded peers. We look forward to celebrating the HCASC legacy and the friendships we’ve made over the past 30 years.”

In addition to celebrating the HCASC scholars, Honda also honored an individual who has dedicated his or her life to service in the community with the fifth-annual HBCU Power of Dreams Award. This year’s recipient is Chuck Hobbs of Tallahassee, Florida. Hobbs is a Honda Campus All-Star Challenge alumnus and volunteer. He has mentored thousands of young people over the past three decades, including students at Florida A&M University (FAMU), FAMU Developmental Research School and Morehouse College. He is active on social media, promoting HBCUs and the unique role they play in the African American community.

“Chuck embodies the Power of Dreams and encourages young people to realize the power of their own dreams, so it’s very fitting that we honor him with this award,” said Morikawa. Honda presented Hobbs with a surprise grant to help him continue his mission and positive impact in the HBCU community.